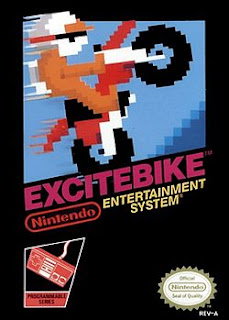 Excitebike is a Famicom racing game produced in 1984, which meant that it was available to be a launch title for the NES the following year. It was designed by legendary Nintendo producer Shigeru Miyamoto, and benefits enormously from his uncanny ability to perfectly shape an enjoyable gameplay experience.

The player controls a motocross rider along a side-scrolling track, attempting to complete a track of ramps and obstacles within a specified time limit. It looks alarmingly simple, but hides a fair amount of subtlety and depth. 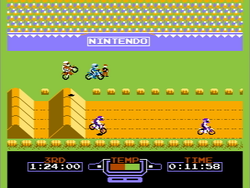 There are two ways to accelerate: accelerate by pressing one button and the bike will travel at a moderate speed, but hardly one likely to break any records or win any races. Accelerate by pressing a second button and the bike will travel much faster, but also begins to overheat. Most races then become a balancing act between going fast and risking blowing the engine, and going slowly and cooling the engine down.

Hitting a ramp throws the bike into the air: the directional controls then determine the angle at which the bike hits the track. Hit it level on both wheels and it's possible to accelerate effectively. Hit it on an angle and the bike may slow down or tumble and throw its rider. Choosing when to take a ramp and when to steer around it is part of the game's challenge.

The game also featured a clever design mode, which allowed players to create and play their own tracks. While these sorts of features continue to crop up today, it's difficult to think of a console title to include a game-making mode than pre-dates Excitebike.

By the standards of later NES titles from the late 1980s or early 1990s, Excitebike is perhaps a limited and outdated game. It still stands up remarkably for me: simple to play, yet with an addictive longevity. It did get a belated sequel in 2000 (Excitebike 64), but in this case the original is still the best.
Posted by Grant at 5:01 PM