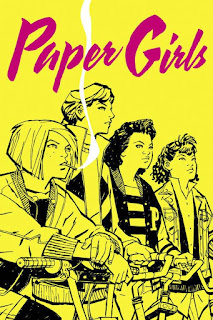 Brian K. Vaughn has written so many great comic books - Ex Machina, Y the Last Man, Saga - that pretty much anything he writes now seems to be a guaranteed must-read. Add in artist Cliff Chiang, whose striking and effective work on Wonder Woman from 2011 to 2014 helped to make it one of DC's strongest books, and you've got a killer combination - but what have they combined to make?

Paper Girls follows a group of teenage girls who deliver newspapers in 1988 Cleveland, which does sound like fairly odd stuff for a writer better known for foul-mouthed space opera, super-powered city mayors and post-apocalyptic science fiction. Then the weirdness slowly begins to kick in - I have no idea where this book is going but I'm pretty sure I'm going to enjoy it.

To be honest there's not a great deal in this extended first issue to clue the reader into what sort of book this is actually going to be. Instead there's a lot of fine work done into introducing and fleshing out the book's four protagonists: Erin, MacKenzie, Tiffany and KJ. It's really appealing to read, and has a nostalgic 1980s Amblin Entertainment glow akin to J.J. Abrams' film Super 8.

Cliff Chiang's artwork is perfectly suited to the script, giving the book a simple sort of all-ages feel. Thanks to Matt Wilson's subtle, almost monochromatic colouring, it actually feels quite a lot like Waid and Samnee's run on Daredevil - which Wilson coloured.

Under the cut: reviews of Lando, Teenage Mutant Ninja Turtles, Tet, and the worst comic book of the year.

When I read that Marvel were producing a five-issue miniseries dedicated to Star Wars character Lando Calrissian, I was pretty excited. Now that the series is complete, my excitement has made way for happy satisfaction: this is exactly what I wanted from Lando, nicely written and wonderfully drawn. Charles Soule nailed the character while providing some great back story for both Lando and his Empire Strikes Back sidekick Lobot. When Marvel took the Star Wars license from Dark Horse I was worried the quality would drop. Instead they've been raised even higher - these Star Wars titles, or at least the ones I've read - are the best licensed titles of their kind on the market. Next week sees Chewbacca #1. I'm enthusiastically on-board. (4/5)

Langdon Foss is a wonderful artist. Jordie Bellaire is a sensational colourist. They both deserve much, much better than this: a three months late self-indulgent act of creative masturbation. Here's what the promotional copy for this issue said: "The city mutates. Nasia runs. The ghosts are more than ghosts now-they are real, and decisions are made." Instead what we readers get is writer Ales Kot breaking the fourth wall, and admitting he doesn't have an ending for his story. He admits the entire book was just a weird act of personal therapy regarding his own father, and really - are endings that important anyway? The answer, of course, is yes - endings are particularly important. By concluding his self-indulgent miniseries in this fashion Kot is pissing in the face of every reader willing to pay the US$15.96 to purchase all four issues and then demanding that we like the taste. If it was a savage over-the-top satire of Grant Morrison, I'd maybe be impressed, but if it somehow is that then Kot has badly mishandled the attempt. Instead it reads like someone who has read a little too much Morrison and who has decided they can do his brand of strangeness just as effectively. He can't: this screams of both self-importance and self-indulgence. It is the work of a creator who's overreached, fumbled the ball in a catastrophic fashion but then refused to step off the playing field. I feel inclined to send him an invoice via his publisher, demanding my US$15.96 back, along with an addition fifty for the wasted time. Self-indulgence like this should not be tolerated: do not buy Ales Kot's books. There are literally thousands of comic book creators out there who deserve your money more. For the very first time in this column: (0/5)

This current version of the Ninja Turtles reaches its historic 50th issue. It's the best sort of climax, pulling the entire series together into a pitch-perfect conclusion, and then throwing in a two-page epilogue that promises an all-new exciting arc for the future. Some big changes happen here, and because they've been so long in the making over the course of this series they actually feel earned by the creative team. On top of that it boasts great art, plus a nice mixture of drama and humour. If you've ever been a fan of the Turtles, you should be reading this comic: it's pretty damned great. (4/5)

Two issues into Tet and I'm becoming remarkably impressed. This is a fantastic blend of two genres, as a retired US army veteran returns to Vietnam to help solve a murder he never solved back during the War. It's a genuinely clever blend of crime story and war story, with each half of the book providing a fresh perspective on the other. Paul Tucker's artwork is well suited to both genres, presenting a gritty, unglamourised look that matches Paul Allor's melancholic story and dialogue. (4/5)
Posted by Grant at 11:24 PM