Doctor Who: "Under the Lake" 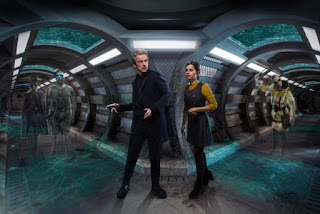 The Doctor (Peter Capaldi) and Clara (Jenna Coleman) arrive at an underwater base in 22nd century Scotland, only to find its crew hiding from a pair of mysterious ghosts. The Doctor is compelled to keep the crew safe while solving the mystery of the ghosts - and of the strange alien spacecraft recovered from the lake's bottom.

'Base under siege' is pretty much one of Doctor Who's stock-in-trade formats. As early as the second episode of "The Sensorites" back in 1964 the Doctor and his companions were trapped in confined spaces with a group of fearful humans, attempting to outwit and outmatch an invading alien force. It was probably 1967's "The Moonbase" that perfected the format, although even then it was largely copying story elements tested out in "The Tenth Planet" a year earlier. It seems as long as there is Doctor Who it will, inevitably, return back to a small group of humans running down corridors. Here we are again in 2015: a base, some humans, some aliens, a bunch of corridors, and a siege.

That is probably part of why "Under the Lake" seems some a comfortable watch. Writer Toby Whithouse knows the series well, and he has 50 years of history behind him to understand precisely how the format works best. This is remarkably old-fashioned Doctor Who in many respects, and on a purely selfish level I love it for that.

It is also the second two-parter in a row. I adore multi-episode stories, not simply because they return the cliffhanger to Doctor Who, but because they offer the series room to breathe. Think about it: most episodes of Doctor Who introduce a new setting and new characters every week, and needs to introduce them, give them depth, tell a story, and give time to the regular cast all in the space of about 43 minutes. There's simply no time to squeeze it all in, and since the series returned in 2005 something has almost always been squeezed out - and it's usually a sensible narrative. Giving this storyline two episodes instead of one simply allows everything to relax. We get a plot. We get an engaging and well-developed guest cast, and we get plenty of light-hearted and entertaining banter between the Doctor and Clara.

I was particularly impressed with the inclusion of Sophie Stone among the guest cast. Stone is deaf, and plays a deaf character here, but as far as this first part goes her deafness plays no part in the narrative whatsoever. It's one of those remarkable and commendable bits of casting and writing that shouldn't really be commendable at all: disabled performers should be given every opportunity for roles as the able-bodied.

"Under the Lake" has a wonderfully measured pace, a great cast, and some genuinely creepy ghosts. As is always the cast with two-parters my final opinion requires seeing the conclusion first. For now I think it's great: the third such episode of the season. Doctor Who really is on a roll this year.
Posted by Grant at 10:04 PM