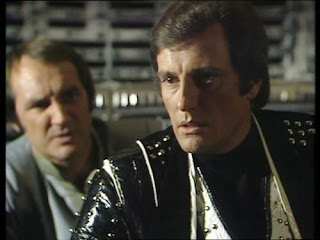 Scorpio arrives at the isolated world of Malodar, where the long-missing physicist Egrorian (John Savident) has suddenly re-appeared. Egrorian has an unexpected offer for Avon (Paul Darrow): give him Orac in return for the tachyon funnel - a weapon so powerful it could destroy the Federation without days.

Robert Holmes returns to Blake's 7 for one final script, with a much smaller focus than his earlier works. For the large part it's essentially a four-hander: Avon and Vila (Michael Keating) take a shuttle down to Egrorian's Malodar base and negotiate the exchange of Orac for the funnel from Egrorian and his frail assistant Pinder (Larry Noble). The tight focus helps the episode enormously, both fleshing out the guest characters while providing some excellent enrichment of both Avon and Vila. If you're a fan of these two - and let's be honest, which Blake's 7 viewer isn't? - then this may run close to being your favourite episode.

John Savident has already appeared in Blake's 7, back in Season 2's "Trial", but he's playing a vastly different character here. Egrorian is a flamboyant and overly theatrical character, visually unattractive and yet aggressively sexual. He paws over Avon and Vila, and bemoans Pinder's loss of youth. It would be easy to assume the character was gay, except that he fawns over Servalan (Jacqueline Pearce) most of all.

Yes, Servalan is back - this time not aiming to steal Avon's ship but simply to finally get her hands on Orac. Egrorian's offer is a trap, although it's a weirdly inexplicable one since he and Servalan appear to be using the galaxy's most powerful weapon as bait. Why bother with Orac when you could blow up Scorpio from light years away and simply hold the entire Federation to ransom? It's the one misstep in the episode, and sadly it's a fairly big one.

Larry Noble is great as Pinder. Exposure to "Hoffel's radiation" has left this 27 year-old technician with the body of an eighty year-old. Noble plays the part beautifully, turning Pinder into a frail, naive and ultimately quite tragic figure. He's clearly in love with Egrorian despite the latter's constant torture of him. He's socially awkward and lacking in self-awareness. To an extent he's overshadowed by Savident's bombast as the egomaniacal Egrorian, but the work he does is really quite marvellous.

The episode's highlight is its climax: Avon and Vila have double-crossed Egrorian, giving him a fake Orac instead of the real article. Flying back to Scorpio in the shuttle, they discover that Egrorian has double-crossed them. The shuttle is weighed down to prevent it from reaching escape velocity. They strip whatever parts of the shuttle they can, but it's still too heavy by 70 kilograms - at which point Orac notes to Avon that Vila weighs 73.

The beauty of what follows - Avon stalking through the shuttle's cargo bay, gun in hand, while Vila cowers inside a wall cavity - is that it pushes the series' two longest-running characters into a horrifying situation, and that it does it without changing or distorting one note of their respective personalities. Of course Avon would murder Vila if it meant getting out alive, and of course Vila would hide rather than fight back. It's hard to imagine any other science fiction series making this sort of narrative choice. By episode's end both men are still alive, but the trust is gone. It's clear that the only reason Vila sticks around for the next two episodes is because he knows he's likely no safer anywhere else.

Great characters combine with an unexpectedly dark finale to make "Orbit" one of the best Blake's 7 episodes of all time. It brings the Season 4 quality ratio up to 55 per cent; six good episodes out of 11.
Posted by Grant at 5:07 PM