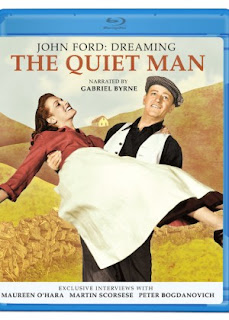 John Ford remains one of the most significant and respected film directors in American history. His name seems synonymous with the American western, and the war film. The Academy of Motion Picture Arts and Sciences bestowed upon him the Best Director Oscar on no less than four separate occasions. Many of his films - including Stagecoach (1939), The Searchers (1956) and The Man Who Shot Liberty Valance (1962) - are beloved classics.

While he seems the definitive American director, he was actually born John Martin Feeney in 1894 to Irish immigrant parents. He may have been a naturally born American, but he held a strong love for his Irish ancestry for his whole life. In 1952 he satisfied a 20 year-long ambition to direct The Quiet Man, an adaptation of a Maurice Walsh short story in which an Irish-born American (played in the film by John Wayne) returns to his home town and falls in love with a local woman there (Maureen O'Hara). It became Ford's most popular and commercially successful film to date, and led to Ford's fourth Academy Award as director.

The making of the film, and Ford's personal connection to Ireland, are extensively detailed in John Ford: Dreaming the Quiet Man. It is a feature-length 2010 documentary from Irish filmmaker Se Merry Doyle.

To be honest the film gets off to a shaky start, as if Doyle is not quite certain where to begin the documentary: with the film itself or with its origins. After a haphazard interview, including interviews with several of the residents of the Irish village where Ford shot much of his film, it falls into a more chronological and natural path. Ford's childhood and subsequent film career are well detailed, leading to his lengthy battle to get The Quiet Man into production.

Obviously Ford himself is long dead, and archival interviews with him show him off as a cantankerous and uncooperative interview subject. Instead his talents and techniques are explained by a succession of critics, film historians and directors - including Jim Sheridan, Peter Bogdanovich and an always-welcome Martin Scorsese. While John Wayne's daughter is able to illuminate her father's participation in the film to some extent, the documentary is particularly helped by the participation of Maureen O'Hara. She proves to be a lively and bluntly honest subject, giving the best detail possible about one of American cinema's most notoriously ill-tempered figures.

The documentary does suffer from its weak opening, and it is ultimately a shade too long, but it's made with passion, is well-researched, and most of all is wonderfully entertaining. Gabriel Byrne's gentle narration pulls the entire work together. It left me eager to rewatch The Quiet Man again, for an informed and fresh perspective: surely that's the aim of a documentary like this. It's enthusiasm is infectious.
Posted by Grant at 9:05 AM