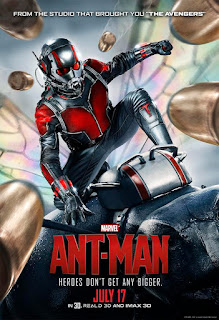 Scott Lang (Paul Rudd) is a thief recently released from prison. All he wants is to secure a stable, legal job and spend time reconnecting with his young daughter Cassie. Instead he finds himself drawn into a scheme by retired scientist and entrepreneur Hank Pym (Michael Douglas) to steal dangerous shrinking technology from his former company before it can be sold to the highest bidder.

In the last two years or so Marvel Studios have been deliberately pushing the envelope on its superhero movies, almost as if the company's heads are trying to find out how far they can push their successful mega-franchise before audiences get too weirded-out to follow any more. Last year's enormously successful Guardians of the Galaxy demanded audiences follow a science fiction comedy team that featured a talking raccoon and a dance-off climax. This year's Ant-Man takes what has to be one of the most easily mocked superheroes and turns it into a crowd-pleasing action comedy.

Is Ant-Man perfect? No - in fact it's probably the most mediocre film Marvel has released thus far (not worst - just the most middle-of-the-road). Thanks to some clever set pieces and an appealing cast it manages to be a pretty entertaining ride despite its flaws.

Its key asset is Paul Rudd, a long underrated comedic actor finally given a chance to be a fully-fledged Hollywood star. He has an effortless sense of comic timing, and a very relaxed and nonchalant persona, and that saves the film from becoming self-parody. Ant-Man simply sounds ridiculous, but rather than present the character straight-faced or deliberately make a mockery of it, Rudd takes a middle course of noting how stupid the character sounds while still demonstrating a lot of heroism and integrity.

Michael Douglas is great as Hank Pym, but then I've always been a fan. It's another case of Marvel casting a supporting character with a pitch-perfect actor, much as they did with Samuel L. Jackson as Nick Fury or Anthony Hopkins as Odin. Thanks to some impressive visual effects there's even an eerie prologue scene set in 1989 where Douglas looks like he's stepped off the set of Wall Street.

Evangeline Lilly does good work with what she's given as Pym's daughter Hope Van Dyne, but the sad fact is that she simply doesn't get anything of note to do. She feels like a placeholder for the sequel, where she can add variety in her super-heroic guise as the Wasp, but in 2015 filmmakers have a responsibility for their female characters to be more than placeholders. It's a wasted opportunity, and the film's greatest weakness.

Corey Stoll plays a charismatic villain, Darren Cross, although he's struggling a little with a character a little too like several former Marvel antagonists. After seeing Obadiah Stane in Iron Man, Ivan Vanko in Iron Man 2, and Aldritch Killian in Iron Man 3, Cross feels like one too many rich industrialists fighting a superhero using some sort of superior version of the hero's own abilities. It's part of what makes Ant-Man feel a little by-the-numbers: we've been here before and seen a lot of it done better.

Of course the film spent years in development under original director Edgar Wright - who retains an executive producer credits - and fans are always going to wonder how his take on the story might have differed. In the hands of replacement director Peyton Reed it's amiable and competent, but that's honestly about it. It's fun to watch - but also easily skipped.
Posted by Grant at 7:00 AM