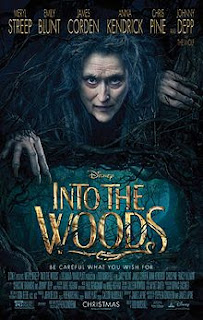 It's been such a pleasure in recent years to see Hollywood re-embrace the musical as a genre worth exploring. While there were occasional attempts to produce a screen musical through the 1980s and 1990s, it's only really been in the last decade and a half that we've finally seen the studios actively pursue new films with the likes of Moulin Rouge, The Phantom of the Opera, Le Miserables, Rent, Sweeney Tood and a host of others. Into the Woods is the latest attempt: a Walt Disney production directed by Rob Marshall (Chicago) and based on the popular Stephen Sondheim/James Lapine stage production.

The simplest description of the plot goes something like this: in a fairy tale kingdom, the Baker and his wife rush to break a curse that's preventing them from having a child. On the way their quest becomes tangled with the stories of Red Riding Hood, Cinderella, Rapunzel and Jack and the Beanstalk. Into the Woods is an ensemble film with multiple protagonists, overlapping storylines, a highly cynical edge, and an unusual two-act format that is almost its undoing.

Here's the thing: most stage musicals, while physically divided into two acts with an interval in between, actually follow a three-act narrative structure. Into the Woods doesn't do this. It presents an entirely self-contained comedic first act that has a definite resolution at the end, and follows it with a much darker, more tragic second act that goes a long way to shattering everything that the first half built up.

This causes a huge problem for the film adaptation: as viewers we're so well trained by conventional storytelling that when the first act concludes at the 75-minute mark it feels as if the credits should be rolling. Having the story continue for another 40-odd minutes beyond that point stretches one's patience and undoes a lot of the goodwill previously generated.

What's a filmmaker to do? It's the source play that developed this odd structural rhythm, which means for Rob Marshall the choice is to either present it as written and bear the consequences, or take the risk of redeveloping the entire storyline and potentially ruining what made audiences like the play in the first place. When directing Les Miserable Tom Hooper chose the second option and partially botched it, throwing off the original musical's rhythms and re-arranging the songs into less effective places. Rob Marshall firmly goes for the first option, running the play's two acts one after the other. It's a frustrating experience the first time, but from the second viewing forth becomes a lot easier to negotiate. I think he made the right choice, as awkward as it is.

His film certainly benefits from its cast. There's not a wrong choice among them, which given the size - basically 14 key characters - is a rather impressive achievement. Meryl Streep makes a brilliant Witch: after a career founded on emotionally tortured women of varying degrees and a range of accents, it's wonderful to see her relax and demonstrably have fun. There's a sense of play to her performance that I rarely see in her other performances.

James Corden is similarly excellent as the Baker. He's an actor who seems to be getting better and better. I was not enamoured with his early roles, but his starring performance in the National Theatre's A Servant to Two Masters really made me sit up and take notice, and he's even more entertaining here. He's since moved on to hosting a late night talk show in the USA, but I really hope he finds time to continue performing on stage and screen.

Emily Blunt plays the Baker's Wife with an extraordinary amount of heart and humour, and she ultimately wound up becoming my favourite character in the film. She inserts so much genuine and naturalistic comedy into her performance. It's a real trick to take a text as broadly written as a fairy tale musical and create a three-dimensional character inside it, but Blunt somehow pulls it off. She's been teetering on the edge of super-stardom for some years now, and I really think she's going to make it.

The rest of the cast are all very strong, with the highlights being Chris Pine's fabulously over-the-top Prince Charming and Lilla Crawford's perfectly-timed comedy as Red Riding Hood. Even Johnny Depp - currently the critics' whipping boy for his seemingly endless stream of eccentric roles - acquits himself admirably in an unexpectedly brief performance as the Wolf.

This is a fabulous adaptation of a quite distinctive and difficult musical. From the performances to the music to the production design - it simply doesn't put a foot wrong. Its only stumble is when it jumps from one act to the next, and given the problems inherent within that jump it's remarkable that stumble is all it does. Into the Woods is strongly recommended.
Posted by Grant at 7:47 AM