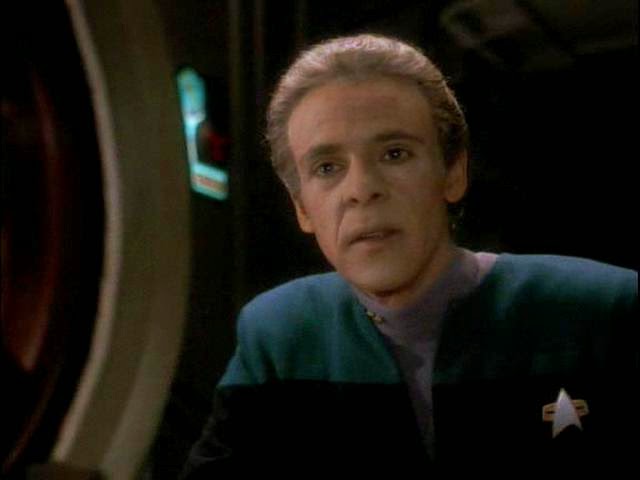 Dr Bashir is assaulted and knocked unconscious by an alien thief. When he awakes, Deep Space Nine is in disarray as some unseen monster stalks down the crew on-by-one. It soon becomes apparent that Bashir is not being hunted across the station at all: he is lying in a coma, and an alien virus is attempting to kill him inside his own dream world.

And it was all a dream. This is the kind of maddening, self-indulgent, ridiculous dream world episode that sets my teeth on edge. I imagine they're very popular with the people who made it, since it gives everyone a chance to do something different. The design people can re-light and re-arrange the sets to make them look strange and interesting, and the cast all get to play their regular roles in different ways. The writers and the director can engage in surreal dream imagery. The audience? The audience be damned; this isn't an episode for us, it's an episode for them.

Dr Bashir begins the episode mourning his youth due to his 30th birthday, and once inside his own mind begins to age more and more as he fights the alien's virus. This requires Siddig el Fadil to play the character as an increasingly old man, and the make-up team to give him more and more prosthetics to simulate the character in his 40s, then 60s, then 90s. Both are partially successful: Siddig begins to slip into caricature at around the 70 year-old mark, while the make-up begins to get increasingly rubbery. It does its job, but the nature of the episode's focus on Bashir means that any minor slip-up or lapse in believability is enormously obvious.

Much of the regular cast over-act terribly as they play out representations of Bashir's inner psyche. To be honest it's only Avery Brooks who manages to convince as Bashir's sense of professionalism; everybody else seems to take the episode as an opportunity to let fly like they're in musical theatre. Guest star Andrew Robinson plays Garak in pretty much the same way he always does, and that helps things enormously. The episode's one saving grace is how it continues to push Bashir and Garak's strange friendship, and the third act revelation of precisely what part of Bashir the dream Garak represents.

All up, however, this is a terribly dull episode. What's worse, it's the third substandard episode in a row. That leaves Season 3 with 12 good episodes out of 18, and a quality ratio of 67 per cent.
Posted by Grant at 9:07 AM