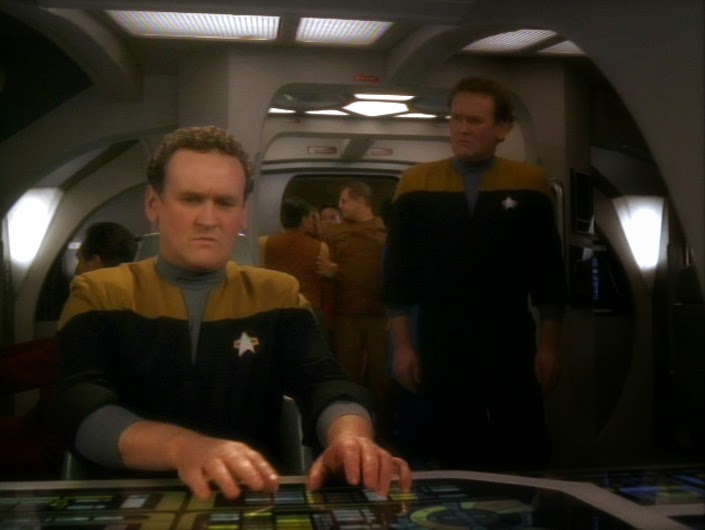 After a workplace accident soaks Chief O'Brien (Colm Meaney) in radiation, he begins to experience momentary jumps into his own future. Meanwhile a delegation has arrived from the Romulan Star Empire, eager to hear what the Federation has learned about the Dominion.

Star Trek is obsessed with time travel. Overwhelmingly obsessed. For decades there were basically two big science fiction TV franchises - Star Trek and Doctor Who - and one of them was based around a time-travelling alien, and the other was the one actually about time travel. Only five episodes ago Chief O'Brien was travelling back in time to rescue Sisko, Bashir and Dax from the 21st century. It's only going to be another 11 episodes before there's another time travel episode. The writers were time travel mad.

The problem with all of these time travel stories is that once you've got a lot of them it becomes harder to harder to make an impact. "Visionary" simply doesn't wind up that interesting. Sure it's got a few cute moments, and it's interesting that the time travel jumps are only a few hours into the future each time, but the bottom line is that this feels utterly generic. In many ways it feels like an episode of Star Trek: The Next Generation that got put into production in Deep Space Nine by mistake.

It's a pity: fans regularly begged the producers of America's TV shows to employ more 'proper' science fiction writers. This episode was written by author John Shirley (from a storyline by Ethan H. Calk), and it's hopelessly ordinary. I do wonder if Shirley might have done better writing his own storyline, rather than what he was given here.

Colm Meaney does a good job with what he's got, and deftly plays up moments of comedy when they're available to him. He's always played O'Brien as a sort of working-class everyman, which I suspect began because the Next Generation writers took about four years to give him any kind of defined characteristics. He's made a wonderful virtue out of a writing shortfall, making O'Brien possibly the most relatable and likeable character Deep Space Nine has.

This is ultimately a very ordinary episode that could be easily skipped. We're 17 episodes into the season, and 12 episodes have been good: that's a quality ratio of 71 per cent.
Posted by Grant at 9:18 AM