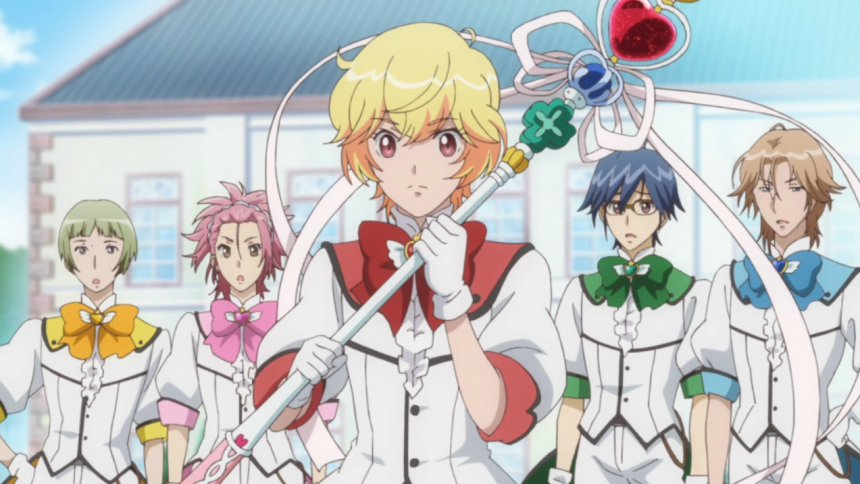 First up, let's just address that remarkable title: Cute High Earth Defence Club Love! (exclamation mark included). It's as if somebody just read out the results of a Scrabble game. I'm a big fan of the weird and lengthy titles many anime receive. My all-time favourite probably remains All-Purpose Cultural Cat Girl Nuku Nuku, but I must admit that Cute High Earth Defence Club Love! gives it a remarkable run for its money.

What is it? Well, for one thing it's new. The first episode aired in Japan on 6 January, and it's currently being streamed online for free via Madman's Anime Lab website. I'm used to coming to review anime a year or two at least after everybody else. Watching something this up-to-date is a new experience for me, and I have to say I am really enjoying these anime-viewing sites and apps like Anime Lab and Crunchyroll for making so much material freely available to watch and try out.

But what is it? Okay, so five high school students are given magical powers by a mind-controlling pink alien wombat in order to save the Earth with love, starting with a talking noodle.

Go on, admit it: you're intrigued.

More sensibly, this is a pitch-perfect satire of magical transforming girl anime; the obvious target being Sailor Moon, but most of us could probably think of a bunch. It's a brilliant take on the concept for several reasons. Firstly it re-casts all five leads roles as boys rather than girls, but still gives them the stereotypical 'fan service' transformation sequence, as they all suddenly turn stark bollock-naked before being magically clothed in frilly, feminine colour-coded outfits. One of the boys is openly embarrassed at his new outfit. Another remarks that he quite likes it. There are numerous instances throughout this first episode that play with gender stereotypes. Male characters openly display traditionally feminine mannerisms and clothing. One of them I actually thought was a girl until about two-thirds of the way through the episode. (He wears a strange sort of sailor top as part of his school uniform, that makes him look like a schoolgirl.) It would be easy to assume that the series has simply swapped bishojo (pretty girls) for bishonen (pretty boys), but so far it seems a little more self-aware than that.

Then there's the way that all five boys treat their magical transformations as a genuine lark. They're characters who have clearly seen the colour-coded tokusatsu-style TV shows of which they're now a part. As soon as they realise they have powers and magical wands, they all start attacking the episode's monster with ridiculous made-up attack names. They do it with such relish that the alien wombat has to shout and tell them off.

Oh yeah, the wombat. I'm not sure what else to say at this point. He teleports into a bathhouse when two of the boys are sharing a bath and asks them to save the world. He's pink. He's an alien that looks like a wombat. He can psychically control the boys' teacher and force him to carry him around in his arms all day.

Also odd is the episode's monster. Obviously given the genre that Cute High is riffing on, there has to be a random monster. This one's a withdrawn, depressed high schooler who has transformed into an enormous talking chikuwabu - a sort of wheat-based Japanese foodstuff.

I absolutely love when anime gets this weird. When you add in how funny it all is, and how well-played the dialogue is, not to mention the bright, appealing character designs and animation, and I think I've found a new favourite. And I haven't even mentioned the evil green hedgehog yet.
Posted by Grant at 9:32 AM