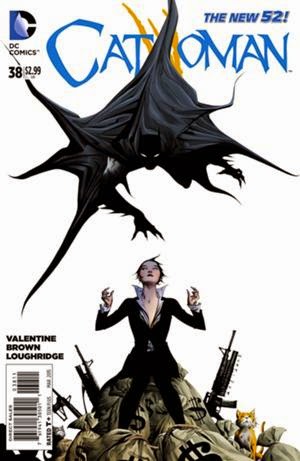 In January 2015, the American comic book industry was all about Star Wars. The first issue of Marvel's new ongoing Star Wars comic shifted close to a million copies via Diamond Distribution to the USA and Australia alone. Additional sales in the UK (which aren't counted in Diamond's figures) will easily push it over to make it the first million-selling American comic in years. Certainly it's the highest-selling single issue since Diamond started exclusive distribution in 1997.

All of this activity saw Marvel claim a pretty healthy market share of more than 40 per cent, but I think all of the attention on Star Wars is masking some pretty serious downward trends among DC's titles. Put simply, some of the main DC titles are really starting to slip with readers. Justice League dropped below 70,000 readers for the first time the New 52 launched. Similarly Aquaman dropped below the 30,000 unit mark, and Green Lantern below 40,000. Detective Comics dropped by 3,000 copies. That follows a similar drop in December, suggesting that despite the sterling work Manapul and Buccelatto are doing on that book the market simply isn't buying. Sales are still above 50,000 copies, so it's doubtful DC will be taking any drastic measures, but it must be of concern.

DC have a two-month crossover coming up in April and May, and are launching 24 new comics in June and setting up new creative teams on many of the continuing titles. Hopefully that will bring some readers back.

Let's have our standard look at new titles: DC books that shipped their sixth issue or earlier in January.
Some other general observations:
So all up, which books are in trouble? Books coded 'orange' are selling between 20,000 and 30,000 copies a month, so there's a good chance DC is keeping a very close eye on them. Books coded 'red' are selling less than 20,000 copies and are in immediate risk of cancellation. Books coded 'black' are dead in the water with less than 10,000 copies shipped. Anything already cancelled or about to be relaunched is highlighted in bold text.

This was the 1,200th post on The Angriest. Thank you for reading.