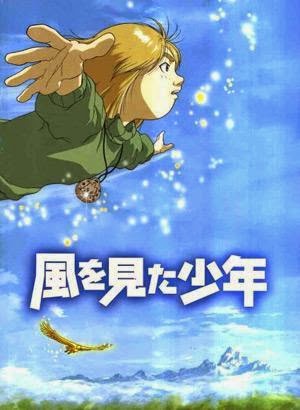 Amon is a young boy who possessed the power of the long-lost "wild people": he can create glowing light and energy with his hands, and can fly through the air like a bird. When the Golden Snake Empire tries to force Amon's scientist father to exploit his powers and generate a super-weapon, his father refuses and is killed. Amon escapes, and heads on a journey that leads him to fighting the Empire himself.

The Boy Who Saw the Wind is a 2000 anime feature directed by Kazuki Omori and based on the novel by Welsh author C.W. Nicol. Omori is best known as a director of early 1990s Godzilla movies, but here he tries his hand - and with some success, it must be said - at directed animation instead. This is a nicely written and competently directed anime, although to glance at it you would expect it was released some years earlier than 2000. If it has a major fault, it is that it owes an enormous debt to Hayao Miyazaki. In some sequences and themes the film seems so indebted to Miyazaki's works that it's like watch some weird inferior copy: Laputa: Spirited Away in the Valley of the Wind.

The whole film really does feel like an oddly derivative jumble of other anime productions. It has the strange fictionalised pseudo-European settings of Laputa and Kiki's Delivery Service - save for the parts where Amon goes to live in a sort of semi-Polynesian village for 20 minutes. It has a narrative obsession with flight, just like... well, just like pretty much every Miyazaki movie ever made to one degree or another. It has the Nazi-inspired totalitarian government, and the popular revolution against it. It has lengthy scenes of things exploding. There's no shortage of ideas in this movie - just a shortage of original ones.

As I mentioned above, the animation does feel just a little bit limited and out of date. The colours are generally rather dull, and the character designs awfully generic. Amon stands out from the rest of the cast: there's something about the way he's drawn that makes him look less like an anime character and more like an escapee from a John Romita Jr comic book.

This is a reasonably enjoyable film, but only reasonably: there's little ambition to be seen here, and the narrative seems to stumble through a lot of different places and possibilities before finally settling upon an ending. This movie isn't going to waste your time, but neither is it worth hunting down.
Posted by Grant at 8:04 PM