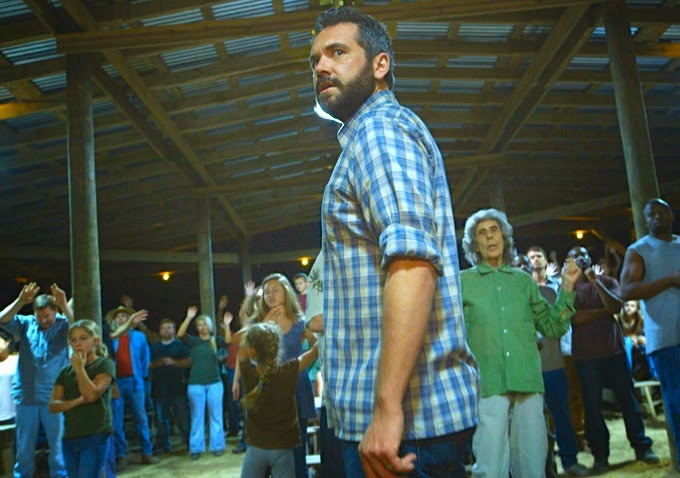 Two journalists accompany a fashion photographer to a reclusive religious commune named Eden Parish, where his sister - a recovering addict - has made a new life for herself. At first it seems a strange but utopian Christian community, but soon a darker side emerges and the three visitors begin to fear for their own safety.

The Sacrament is a thriller by American writer/director Ti West. I am a huge fan of West's work, including his exceptional low-budget horror films The House of the Devil (2009) and The Innkeepers (2011). He is clearly a lover of old-school 1970s horror, but has also demonstrated a remarkable versatility: the two previous films I have cited are quite distinct from one another, and scare audiences in different ways each time. With The Sacrament he seems to be trying something new again, adopting a first-person POV approach akin to The Blair Witch Project or Cloverfield, and telling a story that's much more grounded and believable. It's not a perfect film, nor is it close to his best, but it does remain a quite potent and provocative thriller with more than enough great moments to make up for any shortfalls.

There's something about the first-person format (often referred to as 'found footage', although in this case it's probably not an accurate term) that lends itself particularly well to horror movies and thrillers. It locks the viewer into the experience of the protagonists in a very direct fashion: by virtue of the format we only ever get to see and hear what they do. It's an excellent format with which to build tension, and certainly for the first half that tension just keeps building and building.

Sadly the second half mostly disappoints. The film is inspired to an enormous degree by the real-life Jonestown massacre in 1978, and anyone familiar with that mass tragedy will already be three steps ahead of the film as the story develops. There are some outstanding moments of horror to be had, but they're a little sparse in what is, all things considered, a bleak but unrewarding climax.

The actors are generally quite strong, particularly Amy Seimetz as Caroline, the drug-addicted sister who drags our protagonists to Eden Parish. I've really liked Seimetz in several films now, notably A Horrible Way to Die, and she's fast becoming an actor for whom to keep an eye out. Also very strong is Gene Jones as "Father", the charismatic leader of the Eden Parish cult. Films like this rise and fall on the strength of their antagonist, and Jones does an outstanding job. A.J. Bowen and Joe Swanberg play the journalists, Sam and Jake, with a strong sense of realism. They're convincing, but the script never really gives them anything significant to do.

One thing that always obsesses me with these kinds of first-person thrillers is how they logically wind up edited together as films. In the case of The Blair Witch Project and Cloverfield it's made clear that we are watching an unedited 'found' videotape, which is clear enough. Other films, notably The Last Exorcism, are presented as edited documentaries where there's actually no logical way that such a documentary could have been edited together. The Sacrament almost gets it right, and then slips up in its final minutes in the most annoying of fashions. It's a minor problem, and one that many viewers probably won't even see happening, but for me it jumped out of the screen and jarred badly.

All up this film is a mixed bag, with many good elements but overall a few too many disappointing ones. It's worth watching if you're already a fan of Ti West. If you're not, I'd recommend starting with earlier, stronger films like The Innkeepers and to see how you go.
Posted by Grant at 9:52 AM