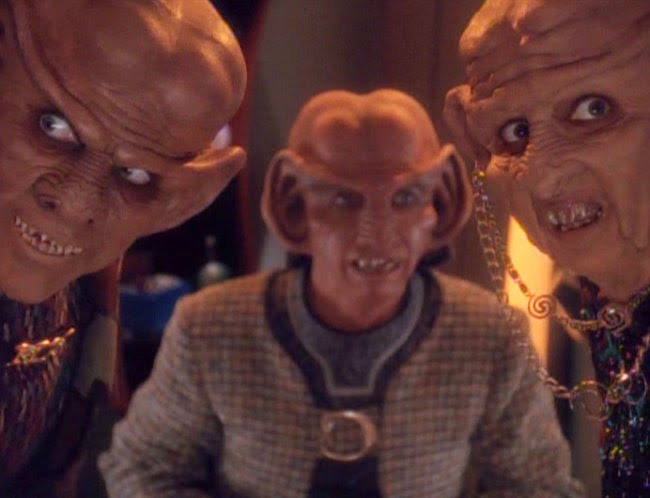 When a representative of the Ferengi Commerce Authority shuts down Quark's bar, he is forced to return home to Ferenginar to face accusations that his mother has been wearing clothes and earning profit. While Quark (Armin Shimerman) attempts to force his mother to confess and return the money, his brother Rom (Max Grodenchik) just wants his family to get along.

While I expect one or two light-hearted Quark-centric comedies per season on Deep Space Nine, I'm not sure I was expecting to find a third. It made me immediately apprehensive, because these episodes tread such a fine line between being amusing and being slightly irritating. This episode also sets off alarm bells with its premise: one of the hardest parts of the Ferengi to tolerate is their misogyny towards women, so the idea of an episode where Quark's goal is to get his mother back in enslavement where he thinks she belongs is a pretty appalling one.

All up, it actually works okay. One of the real benefits of this episode is seeing more clearly than ever just how Ferengi society works. The seeking of profit isn't merely overwhelming, it's ritualised. When you go to a government office, you need to make a micropayment to speak to anyone. When you sit down to wait to be called, you make a micropayment to use the chair. When you visit someone's house, you have to buy a ticket to enter. Everything in their society has worth, which makes it all the more striking that they consider women to be worthless.

They tread such a careful line here with Quark. This episode needs him to staunchly defend Ferengi tradition by telling his mother to stop showing independence and just do as she's told. The series needs him to be a broadly likeable figure. To a large extent these two goals seem incompatible. Somehow writers Ira Stephen Behr and Robert Hewitt Wolfe make it work. Quark is visibly driven not by sexism but by a sense of tradition; once Rom and his mother Ishka (a superbly funny Andrea Martin) convince him to ease up, he does so. It turns out more than observing tradition, Quark really does love his mother.

The episode also manages to pull off a great ending: Ishka does confess her crimes, and her money is confiscated, but the second the FCA inspector Brunt (Jeffrey Combs, making the second of several appearances in the franchise) leaves she's putting her clothes back on and revealing she's secretly kept most of her stock market earnings.

In a brief subplot, Commander Sisko (Avery Brooks) finally meets the freighter captain that his son has been begging him to date: Kasidy Yates (Penny Johnson). It's amiable stuff, and kicks off a romance that will run for the rest of the series.

I really wasn't expecting to like this episode. It's not the very best that Season 3 has to offer, but it's funny where it counts and really expands and showcases Ferengi society in an interesting way. This was the 23rd episode of the season, and the 17th good one: the quality ratio is up to 74 per cent.
Posted by Grant at 9:33 AM