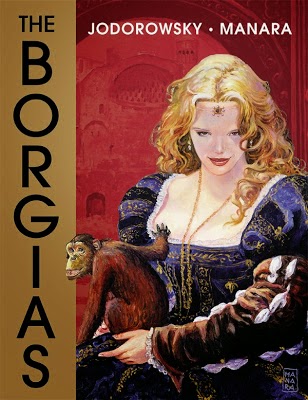 Not the popular television series starring Jeremy Irons - the five-volume graphic novel series by writer Alejandro Jodorowsky and artist Milo Manara. This European bandes-dessinées, originally released between 2004 and 2011, has recently been translated into English and collected into a single hardcover book by American publisher Dark Horse.

It tells the notorious story of the Borgia family, a Spanish dynasty living in Rome whose patriarch Rodrigo was elected Pope. Stories of horrific acts and lewd debauchery surrounded the Borgias, including accusations of murder, adultery, simony, incest and overwhelming corruption. It's likely impossible to know which, if any, of the numerous accusations against the Borgias were true; Jodorowsky and Manara assume for their book that they all were, making this a very confronting descent into the worst excesses of human depravity. This is one graphic novel that is categorically unsuitable for children.

It was. Jodorowsky may have written The Borgias with an eye for political satire and comment, but Milo Manara has absolutely illustrated it with an eye for titilation and sexual objectification. The book is written as horror, but illustrated as erotica. Either by intention or design, that makes it a deeply uncomfortable read. There is a long, rich tradition of presenting graphic scenes mixing sexual activity, violence and torture, employed by the likes of de Sade and then (adapting him) Pasolini, and even more recently with horrifying and confronting films like Irreversible and A Serbian Film. Such works, which are understandably controversial and oftentimes difficult to watch, are successful when they present horrific events in an appropriately horrifying and unpalatable way. The Borgias fails to work because in visual terms it would appear, to me at least, to invite us to be aroused instead. It almost seems as if Manara cannot help himself: erotica is his stock-and-trade, and is for what he is most widely renowned. Perhaps he simply ran on automatic and illustrated the story in the only way he knew how.

The book is handsomely packaged, and reads at a comparatively brisk pace. There is merit in the work, and taken entirely in isolation Manara is clearly an immensely talented illustrator. It's still pretty awful stuff, and rather difficult to get through. By the end I was skimming, just to make sure there wasn't something in there to break the monotony of the sex and the torture. This is an audacious book. It's also a near-unreadable one.
Posted by Grant at 8:22 PM