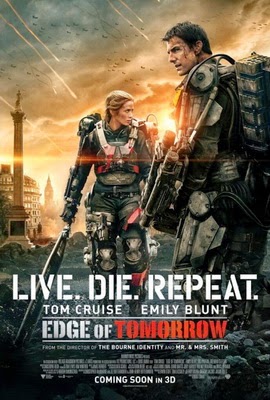 The lazy description of Edge of Tomorrow would probably be something along the lines of "Starship Troopers meets Groundhog Day". It boasts the military SF trappings of the former and the time loop schtick of the latter. While Groundhog Day used it's time travelling premise for comedic purposes, Edge of Tomorrow uses it to construct a genuine clever action-thriller that boasts strong characters, talented actors, and multiple surprises in the plot. I missed this film in cinemas, and now I really regret that: this is the sort of smart, good-looking blockbuster that Hollywood should be making all the time.

Tom Cruise plays Major William Cage. He's in marketing by trade, and has spent the war producing and presenting propaganda newscasts and commercials for the war effort. Not only is he not a trained soldier, he's an active coward: when told of a plan to install him on the front line his first instinct is to run out of the room. It's the kind of role at which Cruise excels: he always seems perfectly suited to playing insincere and oftentimes unlikeable men whose experience transform them into something better. It's the kind of role that made him so great in the likes of Rain Man and Magnolia, and he does just as strong a job here.

Emily Blunt plays Rita Vrataski, a hardened war veteran who's also the only person who has experienced the strange time loop phenomenon affecting Cage. It's a great role for Blunt, showcasing a much more brutal and authoritative side to her that wasn't available to her in most of her earlier roles. It feels like Blunt has been hovering on the edge of super-stardom for a couple of years now. By all rights this should have been the film to push her over the edge.

The real star of the film is the editing: all due credit to James Herbert and Laura Jennings. It's not often you come away from a film thinking about how well it was cut together, but in Edge of Tomorrow's case it makes all the difference. It would be easy, with a narrative that's looped over the same 36-hour period, to show too much of the same scenes and settings. This film overcomes that marvellously: we only see what we need to see, and the abrupt jumps from day to day not only generate some of the film's best moments of humour, they also keep the plot rattling along at a remarkable speed. Most science fiction blockbusters these days hover around the 150 minute mark: Edge of Tomorrow clocks out at a lean 109 minutes. There's no time wasted, and there's no extraneous detail. It even knows the precise moment at which to cut to black and roll the credits.

Director Doug Liman has had a slightly patchy career that's included both hits (Go and The Bourne Identity) and spectacular misses (Mr and Mrs Smith). I think this may be his best film. It's a remarkably effective big-scale movie, and tremendously entertaining stuff.
Posted by Grant at 9:22 AM