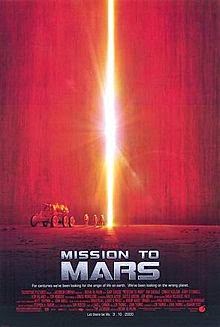 2020: a human mission to Mars turns disastrously wrong when the team of astronauts uncover and activate an alien structure. It sweeps them into a vortex and kills all but one of the crew. A rescue mission is dispatched from Earth, commanded by Woody Blake (Tim Robbins) and Jim McConnell (Gary Sinise), but they sooner encounter crises of their own.

Mission to Mars is a textbook lesson in the importance of a good screenplay. This film has a very talented director, Brian De Palma, and an excellent cast that includes Robbins, Sinise, Don Cheadle, Connie Nielsen and Armin Mueller-Stahl. Its orchestral score was composed by screen legend Ennio Morricone. Its cinematographer, Stephen Burum, worked on The Untouchable, Something Wicked This Way Comes, Carlito's Way and The Outsiders. The sets are fantastic, including a brilliant 2001-inspired rotating spacecraft that De Palma and Burum shoot brilliantly. And all of that skill and talent is hopelessly wasted, because the underlying screenplay (credited to Jim Thomas, John Thomas and Graham Yost) is so utterly facile.

Hollywood made two Mars movies in 2000: the other was Antony Hoffman's Red Planet. That's actually a rather common occurrence in the industry. 1998 featured two asteroid movies, Armageddon and Deep Impact. 1997 featured two volcano movies, Volcano and Dante's Peak. 2014 featured two movies about Hercules. Here's how it works: Hollywood develops movies all the time. Most of them never get made. Many of them bounce around the studio machine for years - occasionally even decades - as they get developed, dropped, picked up, re-developed, abandoned, recovered, and transformed. Eventually one gets a green-light, and it's announced to all that it's going into production. Let's say in this case, as it was in this case, a sci-fi film about Mars. At this point every other studio with a Mars movie in development realise that the only chance of their Mars movie hitting the screen in the next five years is if they rush their version into production immediately and get into cinemas first. Rushing films is never a good idea, and rarely ends well for the film, the talent, or indeed the audience who get tempted in to watch it.

I suspect this is what led Mission to Mars to head into production on the basis of such an undercooked screenplay. These aren't untalented writers - Jim and John Thomas wrote Predator and Executive Decision, while Graham Yost wrote Speed and created Boomtown and Justified. Mission to Mars is, by a long margin, the worst film with which these guys have been involved. It's that awful screenplay where nearly every line of dialogue is a cliche, and every character a well-worn stereotype. The cast do their best, and as I've mentioned they're a really strong cast, but acting only gets you so far when you're saddled with this kind of material. Some of them, notably Tim Robbins and Jerry O'Connell, give their best in trying to make their lines work. Others, particularly Gary Sinise, look remarkably uncomfortable that they're in this movie at all.

It's not just the dialogue or the narrative that fails. On a structural level the film is wildly off-base. It opens with a barbeque, then cuts to a Mars mission already well underway. It showcases an enormous alien structure that whips up a sandstorm that wipes out the original crew. At that point 90 per cent of the film's potential suspense is dead. The replacement crew travel to Mars to rescue the one suspected survivor, but we already know what they're going to find there. A little mystery would have gone a long way here.

The film does contain one stand-out sequence, which is a suspenseful attempt to patch two holes in a spacecraft fuselage after it goes through a meteoroid storm. Space is astonishingly dangerous, and to date our real-life spacecraft have been jaw-droppingly fragile machines. This scene successfully sells us on both, and boasts strong acting, tight editing, and some great Morricone music (music which, either by accident or design, Hans Zimmer duplicated in last year's Interstellar). It's a momentary glimpse of what this film could have been like, had Touchstone Pictures waited a few more months to develop a proper screenplay.
Posted by Grant at 10:01 AM