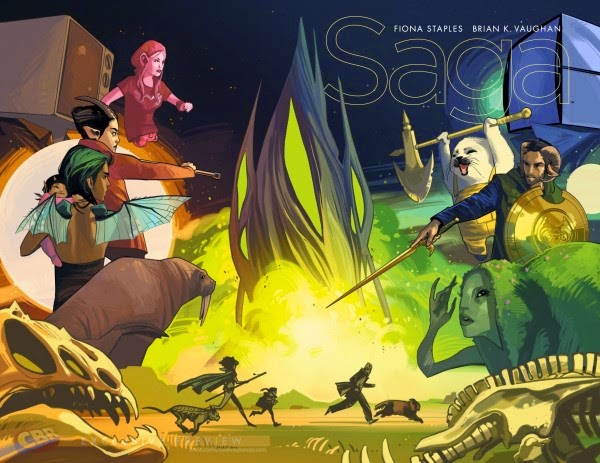 Saga has returned! This 25th issue kicks off the fifth volume of the book, and picks up where issue #24 left off: half of the cast kidnapped, the other half forced to team up with the villain to chase after them.

I was rather underwhelmed by the last volume of this comic, which seemed to unexpectedly jump forward in time by two years and then do a lot of odd work in making me actively dislike characters I had previously liked an awful lot. To an extent that damage is still done; despite Alana's stressful situation, I'm struggling to care that much about what happens to her. That said there's an urgency and a narrative drive in this issue that's been missing for a while, and that makes up for my lack of empathy quite a bit.

I'm hugely invested, on the other hand, with Marko. Forced to team up with Prince Robot, and terrified that his daughter is dead or lost to him forever, he's now the emotional core of the book. His situation is awful, and both Vaughn's writing and Staple's artwork really bring home just what a nightmare scenario he is in. It's momentarily quite powerful stuff.

One of the things that impresses me about how Vaughn writes this book is the way in which he casually drops in major plot information through Hazel's narration that in any other book would feel like a massive spoiler (here she reveals her father won't see her again for several years). In Saga, however, it's something that adds weight and gravity. We're already sad see Marko mourn losing his daughter; once we learn that he's not going to find her any time soon, it feels overwhelmingly tragic.

Staples' art remains as close to flawless as one can get. She highlights character over background detail, and gives the various protagonists real personality and depth. This is, all up, a brilliant issue. I hope the quality I loved in the first 18 issues has finally returned. (5/5)

The final part of this horror-themed storyline culminates in the unexpected (and as far as I can determine, wildly re-imagined) return of a classic Superman villain. That's actually pretty clever, pulling the rug out from under my feet and giving me a genuine surprise. It's generally well-written, and has solid artwork by Aaron Kuder and surprisingly Scott Kolins (I generally loathe his art, but didn't mind it here). My problem with this whole arc still stands, though: it's a horror story, and I don't think horror suits Superman at all well. So well written and illustrated, but not entirely my cup of tea. (3/5)

A dying screenwriter is on the run from the police while one of his own creations forces him to keep writing his final script. This is the best comic book that Grant Morrison has written in years, tapping into the themes and style of his earlier works but shaken up and written slickly enough to make it all seem fresh and interesting again. That said, the real star is Frazer Irving, whose artwork has lifted this six-part miniseries up from bring a good comic to an absolutely brilliant one. It's got a rich, high-budget feel that cleverly reflects the sort of high-budget glossy blockbusters that the book's protagonist has made a living writing. It's top stuff. (5/5)

After the great stuff published in recent issues, to be honest this one feels like a bit of a disappointment. Batman hunts down the Arkham chemist who helped bring that hospital to its knees. Spoiler and Bluebird get into a bit of an argument with little progression of her final page revelation last week (the mastermind behind the whole plot is apparently Bruce Wayne). There's even a little reminder that Batwing is still around, haunted by ghosts after his Arkham appearance. The art by ACO is distinctive and unusual, which is something I've liked in several issues of this series. All up, however, it's a nasty slip in terms of ongoing momentum. Things should be going from plot point to plot point with this kind of a comic; this issue felt a little like stalling for time. (2/5)

Batman and Harvey Bullock team up as the various threads of this story begin to tie together. Anarky's masks seem to have all of Gotham going crazy, while Jervis Tetch (aka the Mad Hatter) gets busted out of prison. Not only do Manapul and Buccellato absolutely nail the tone of Batman, their artwork (Manapul on pencils and inks, Buccellato on colours) is simply outstanding. While I think Batman is the best-written of the Bat-books, I think Detective Comics is by some distance the prettiest. (4/5)

After 11 issues it's time for Ms Marvel's showdown with the Inventor. This is the kind of issue that's difficult to criticise, since comics are a serialised medium and issues like this simply provide a climax and a denouement. It's a great finish to the first story arc that, while a little long (11 issues for one story?), has contained some brilliant character work and fantastic dialogue. I still maintain Kamala Khan was Marvel's top new character for 2014: smart, funny, vulnerable and distinctive. She's immensely likeable. If Marvel aren't positioning her to star in their forthcoming Inhumans feature film, they're making a terrible mistake. (4/5)

It's funny: while Annihilator sees Grant Morrison replay old tropes in interesting and new ways, in many ways it feels like Nameless - his new series with artist Chris Burnham - is replaying old tropes in dedicedly tedious and repetitive ways. Some very weird jumps of logic and story in this first issue make it a really difficult book with which to engage, and there are constant moments throughout that reminded me of older, better work by Morrison. It's also quite deliberately nasty and violent, in ways that come off as tacky rather than shocking. All of that said, it's often difficult to see what Morrison's doing until we're at least a few issues in. This may be a comic worth giving the benefit of the doubt for a couple of months to see if it re-assembles itself into something more interesting. (2/5)

The Woods continues apace in its new, more focused direction, as disturbing new realities become clear and our high schooler protagonists find themselves out of the frying pan and into forced military conscription. I am enjoying this renewed direction immensely, and I'm also enjoying the aggressive pace the book appears to have adopted after the first six or seven issues appeared to drag their feet somewhat. It's also kind of nice that I really don't know where this story is going; the last suddent twist has made the whole book a far more uncertain proposition. Michael Dialynas' cartoonish visuals continue to work in the book's favour. (4/5)