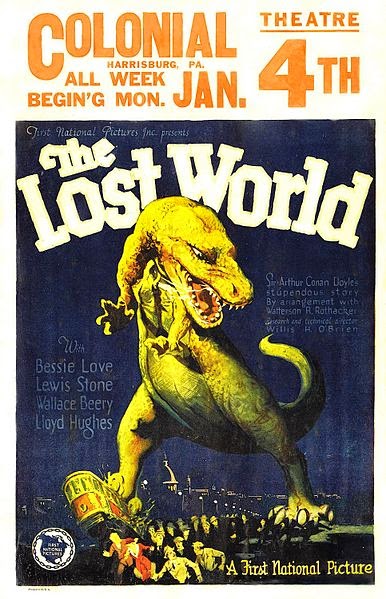 Welcome to Nostalgia Time, an irregular celebration of all the pop culture anniversaries that strike my fancy. Today it's time to celebrate a pretty significant milestone: the 90th anniversary of Harry O. Hoyt's adventure film The Lost World, based on the novel by Arthur Conan Doyle. How old is this film now? For a better perspective, just keep in mind that when it was released into cinemas on 2 February 1925, Arthur Conan Doyle was still alive.

Doyle was a presence in the making of this film as well. In 1922 he brought test footage of the film's famous dinosaurs to a meeting of the Society of American Magicians, showcasing the pioneering stop-motion effects to audience that included Harry Houdini.

It is for Willis O'Brien's remarkable effects that the film is remembered today: it's a landmark achievement in film-making technology, and foreshadowed O'Brien's later work animating King Kong in 1933.

Sadly time has left The Lost World incomplete, and it's impossible today to see the film that wowed audiences 90 years ago. The situation seems to improve every few years, however, as lost scenes are recovered and re-instated. In 1925 the film was 106 minutes long. In 1991 the longest surviving copy ran for 64 minutes. The most recent cut, released in 2000, is 93 minutes long. Only 13 missing minutes to go.

Wallace Beery played Professor Challenger, who leads an expedition onto a Venezuelan plateau where a whole ecosystem of dinosaurs has miraculously survived for millions of years. Six years later he'd win an Academy Award for his leading role in King Vidor's The Champ.

The Lost World was basically Hollywood's first-ever visual effects movie, and a near-century of subsequent effects-driven films owe at least a part of their existence to what Hoyt and O'Brien achieved here.
Posted by Grant at 3:21 PM