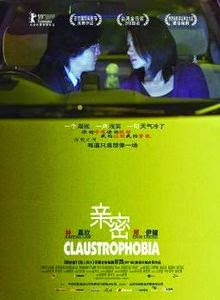 Claustrophobia, a 2008 Hong Kong drama by writer/director Ivy Ho, is a difficult film to summarise. Certainly it's impossible to write about without spoiling the story, since what story it has is extremely slight. Let's just run through its lengthy opening scene. Five co-workers pile into a car and travel one, each being dropped off one by one until only two remain: the stoic, deadpan manager Tom (Ekin Cheng) and the awkward and quiet Pearl (Karena Lam). When the time comes for Pearl to get out of the car, Tom gives her a friend's business card and tells her to call him for a job - otherwise he is going to have to fire her. An incensed Pearl refuses to take the card, demanding he fire her instead.

There's clearly a world of unresolved issues between the two. Rather than show what happens next, Ho jumps back - first by a week at a time, then months, until the film's final scene is set a year before the end of the story. It makes for a very impressive and interesting film. It also makes for a very frustrating one.

Claustrophobia marked Ivy Ho's directorial debut; until then she had worked as a highly successful screenwriter in the Hong Kong film industry. As far as debuts go it's remarkably confident and self-assured. Each scene moves with a deliberately slow, languid pace. Ho makes extensive use of long takes and a smoothly tracking camera. It's a very dialogue-based film, which I suppose was to be expected from a screenwriter turning to direction, but interestingly much of the film's moments of character come not in words but in subsequent silences.

Karena Lam gives a wonderful performance as Pearl, although by virtue of her character it's a performance dominated by pensive glances and troubled pouts. Ekin Cheng, who has never been Hong Kong's most talented movie star, benefits from a role suited to his strengths. Like Pearl he's remarkably quiet and withdrawn, and not very good at expressing his emotions.

Sadly while the lead characters are well written and performed, their actual story rapidly begins to frustrate. You begin the film assuming you are watching the wreckage of some romantic entanglement gone horribly wrong, but as the film jumps further and further back it becomes clear that what you're watching instead is a potential love affair that never actually happened. By the end of the film (and, of course, the beginning of the story) it's hard not to be a little disappointed, even short-changed.

Several of the supporting actors are particularly entertaining, notably Chucky Woo as the phone-obsessed and fairly boozy Jewel, and Felix Lok as the fussy, middle-aged manager Karl. Eric Tsang has a memorable but weirdly out-of-place cameo as Pearl's family doctor.

In the end it's all less of a story and more of a puzzle. You wonder precisely why two supporting characters are fighting, and then eventually see the reason. A character mentions they've given up gold, and you subsequently see why they took up the sport in the first place. It's all cleverly slotted into place, and it's quite an admirable achievement in terms of innovative film structure, but it all comes at the expense of an interesting story.

Ivy Ho's second (and, to date, only other) film was the 2009 romantic comedy-drama Crossing Hennessy, which I absolutely adored. If you were asked to pick between the two, there's absolutely no contest.
Posted by Grant at 6:03 PM