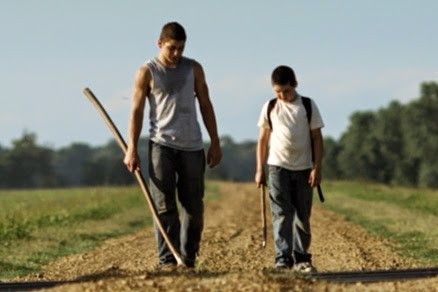 Robbie Hendrick (William Patrick Ruffin) is a 14 year-old boy living in Mississippi. He's dirt-poor, and lives in an isolated run-down house with his senile grandmother and his young half-brother Fess (John Alex Nunnery). Caught stealing at school, he is tasked by his teacher with writing an essay over the summer - and it is through the drafting of this essay that we get an insight into Robbie's troubled life.

This is a 2011 drama directed by Matthew Gordon. It has 'indie' cred all over it: low budget, a lot of handheld camera work, a cast of non-professional actors, and a story that simmers with day-to-day activity rather than build towards an explosive climax. In the end the film is probably a little too low-key for its own good - particularly considering its title. There are several points where it seems events are about spill out of control, but each time Gordon carefully dials the action back and re-positions it back to centre. Alfred Hitchcock once said that 'movies are life with the boring parts cut out'. The Dynamiter, for better or worse, simply shows us life.

William Patrick Ruffin is excellent as Robbie. He lives a very troubled life: his mother has fled their home for California, leaving him to care for his brother and grandmother while pretending to the authorities that she's actually still around. Other kids in town and at school seem to despise him because he's poor, and he repays that spite by regularly stealing from their lockers and birthday parties. For Robbie such theft has become instinctive: he's even stealing for the people who show him kindness, like some kind of instinctive defence mechanism. It would be easy for such a character to be unlikeable, but thanks to a strong screenplay and Ruffin's highly naturalistic performance we wind up aggressively rooting for him instead. The film rapidly becomes a steadily tense waiting game: will Robbie escape from his gradually collapsing life, or will it drag him down for good?

The film picks up considerably at the midway point with the surprise return of Robbie's older brother Lucas (Patrick Rutherford), a failed football player who talks big but is really just a cheap con artist trying to seduce vulnerable women and stealing from their purses. An undercurrent of resentment builds between Robbie and Lucas as the film goes on, getting more and more tense as the story goes on.

That's ultimately The Dynamiter's biggest problem: it's all build-up without any real satisfying resolution. It's certainly more realistic than many other films, and to an extent it works well because of that, but ultimately one feels like they're being teased with a story rather than actually told one. Occasionally the film reminded me of Debra Granik's Oscar-nominated Winter's Bone, which also told a story about a poor teenager in a terrible broken family - only with a lot more suspense and drama. The Dynamiter simply doesn't quite manage to engage.

Strong acting by its star and a well-observed sense of realism do save this film, but it's a film of potential rather than of successful execution. I hope Matthew Gordon gets to direct a second film, because there's a lot of promise in what he's done here. I also hope William Ruffin keeps acting: he has a real talent for it.
Posted by Grant at 9:35 AM