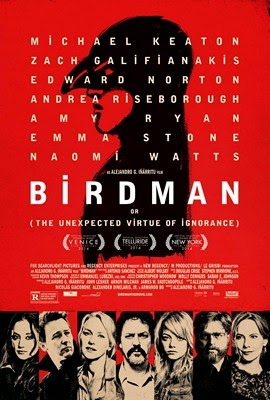 Riggan Thompson (Michael Keaton) is a former Hollywood mega-star, famous for starring as "Birdman" in a trio of big-budget superhero films. When he refused to make Birdman 4 his career stalled; now, 20 years later, he's invested his entire remaining money into a Broadway adaptation of Raymond Carver's What We Talk About When We Talk About Love. Over the course of several nights of preview performances, and in the lead-up to his crucial opening night, Thompson struggles with his recovering addict daughter, his actress girlfriend's pregnancy, a difficult new co-star and his own developing insanity.

Birdman is one of 2014's most widely acclaimed feature films. It has received near-unanimous praise for Michael Keaton's central performance, and it's innovative photography that uses clever editing tricks and camera work to simulate a single 110-minute take. It has received nine Academy Award nominations - by the time you read this, you'll likely know how many it actually won. Sadly it's all smoke and mirrors: in truth Birdman is a facile and unimaginative bore. It's true that it boasts several outstanding performances, and it's also true that in many respects it's a technical marvel. It is all in service, however, of a terrible screenplay.

Writer/director Alejandro Gonzalez Iñárritu has written (with the assistance of three other writers) the worst kind of screenplay: the one that has nothing to say, but which seems to think that it does. Birdman inhabits a world devoid of depth and emotion, and instead replaces them with tics and mannerisms. Riggan Thompson (Keaton) is a shallow, neurotic mess whose entire life consists of craving respect and adoration. Keaton manages to draw an enormous amount of humour out of him, but that's all down to Keaton; viewers who've watched his films over the decades will recognise every trick and beat he employs. Similarly Edward Norton does a great job of playing the volatile Broadway star Mike Shiner, but the character is a bundle of comedy moments and doesn't actually have a character arc of any real note. Nobody does. It's a film of busywork: everybody's talking, and panicking, and doing things, but nobody actually learns a thing. Nobody changes.

It's a genuine shame, because this really is one of the best casts of the year. Not only do Keaton and Norton do good work, there are also excellent turns by Naomi Watts, Andrea Riseborough, Emma Stone and particularly Zach Galifianakis - who gives far and away the best performance of his career to date. There's even a small supporting role for the underrated Merritt Weaver (Studio 60, Nurse Jackie).

So strip away the acting and the photography, and what do we have? People running in circles. Sporadic but half-hearted attempts at magical realism. Plot threads that constantly threaten to develop, but then fail to go anywhere. What do we learn? Apparently Hollywood actors are superficial and untalented. Theatre actors are self-involved and self-indulgent. Critics are the root of all evil: there's a remarkably annoying scene between Keaton and Lindsay Duncan as New York's gate-keeper theatre critic that's pretty much the most childish take-down of a critic by a filmmaker since M. Night Shyamalan had one eaten to death by wolves.

About 10 minutes into the film two endings become immediately obvious, and the remainder of my time was spent guessing which of the two Iñárritu would pick. It turns out he picked both - one after the other - adding criminal indecision to his list of creative missteps.

This is bloated, self-obsessed, masturbatory filmmaking of the worst kind. At 80 minutes it might have just about worked, although it would remain a minor work by any reasonable standard. At 119 minutes it's tedious in the extreme. There's an odd but apposite scene towards the climax where Thompson encounters a man screaming out a soliloquy from Macbeth on the street. You know the one: about a tale told by an idiot, full of sound and fury, signifying nothing.
Posted by Grant at 9:09 AM