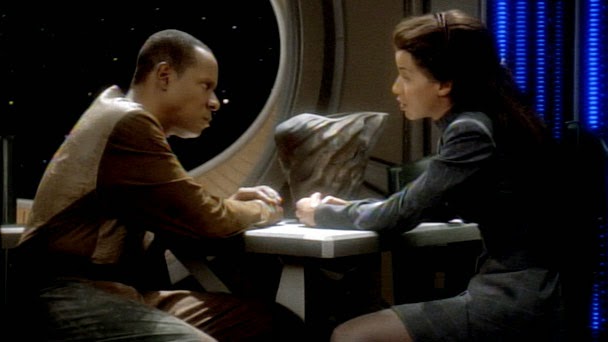 Commander Sisko (Avery Brooks) is kidnapped by a duplicate O'Brien (Colm Meaney), and transported to a parallel universe - the same alternate reality in which Major Kira and Dr Bashir found themselves a year earlier. The alternate Sisko is dead, and the Commander is tasked with completing his final mission: rescuing his own wife, who in this universe never died in a Borg attack.

Given the enormous creative and popular success of Season 2's "Crossover", which acted as a sequel to the classic Star Trek episode "Mirror, Mirror", it's unsurprising that the Deep Space Nine production team elected to return to the alternate universe once again. They clearly put their thinking caps on as well, finding one of the more dramatically interesting and character-enriching alternative situations they could have imagined: reuniting Sisko with his dead wife Jennifer.

This is an incredibly strong episode for Avery Brooks, who's in nearly every scene. Apart from one scene before the opening credits, he's the only regular character we see for the whole hour. Everybody else we see is an alternative version, whether the aggressively sexual Intentant Kira (Nana Visitor), the rogueish "Smiley" O'Brien, or the cruel and vicious Garak (Andrew Robinson). New alternative characters include an untrustworthy Bashir (Siddig el Fadil), a Jadzia (Terry Farrell) who was the alternative Sisko's girlfriend, and even a surprising cameo by Star Trek: Voyager's Tuvok (Tim Russ); in this universe a freedom fighter against the Bajorans.

Sisko is clearly having a ball in the alternative universe. He assumes his doppelganger's life with bravado. He struts, he sneers, he punches Bashir in the face. He even finds time to bed both the alternate Jadzia and Kira on separate occasions, which must make future conversations with their regular equivalents awkward. When he encounters Jennifer, it's with visible affection but also unexpected maturity. He's not this woman's husband and knows it, and acts accordingly. It makes his having sex with Kira and Jadzia all the more inexplicable. It's pretty much the episode's one major drawback.

These kinds of parallel takes on the characters are easily more fun for the actors than they are for the audiences (take the previous episode, "Distant Voices"), but in this case they're really fun to watch. It's a tall order to make a successful sequel to another sequel, but in this case they've managed to pull it off. After a couple of disappointments in a row, Deep Space Nine finally provides another decent, entertaining hour of television. This is episode 19 of the season, and it's the 13th good episode so far. That makes for a quality ratio of 68 per cent.
Posted by Grant at 8:56 AM