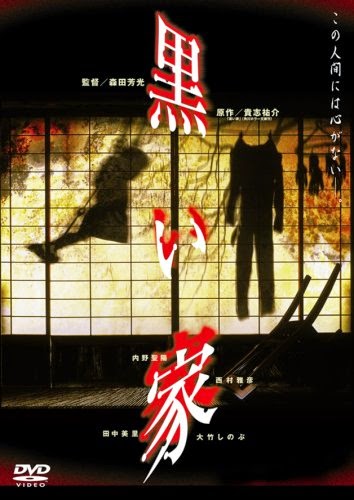 Wakatasuki, a young employee at an insurance firm, receives a telephone call from a woman asking if her life insurance policy covers her committing suicide. Concerned for her welfare, he rushes to her house only to stumble upon the dead body of the woman's son - who has apparently hanged himself. Shortly afterwards the same woman enquires about an insurance payout in the event of an industrial accident - shortly after which her husband has both arms sawn off in a freak accident. By the time Wakatasuki realises the sort of violent sociopath with whom he's dealing, it may be too late. Soon everyone is in danger: his co-workers, his girlfriend, and especially Wakatasuki himself.

Black House is a bleak, odd, and fairly confronting film. It sits somewhere between a thriller and a horror movie, with a strange sideline in absurdist comedy. Some scenes are rather frightening. Others are inappropriately funny. Others are simply weird and uncomfortable. In the end I'm not entirely certain how much I liked Black House, although I'm reasonably certain that I won't forget it in a hurry.

Shinobu Otake plays the deranged insurance-seeking wife Sachiko. It's a startling performance, filled with odd idiosyncratic pauses and stares, seemingly designed to make the audience as uncomfortable and uncertain as the other characters. She gives the character a bizarre sexual air where it's difficult to determine whether she's about to murder someone or attempt to seduce them. In one sequence she does actually attempt both at the same time.

Masaaki Uchino plays Wakatasuki in a very jumpy, nervous fashion. It occasionally seems over-played, but in the film's most tense and frightening moments this sense of rising panic suddenly becomes oddly realistic. It's actually quite unusual for a character in a film to find, say, their brutally murdered colleague, and to actually start shrieking and running around the room.

Yoshimitsu Morita directs the film with a fairly typical Japanese kind of banality. There is a real trend among these sorts of thrillers and horror films - Ring, Cure, Spiral, and so on - to leave the film's photography and locations as typical and ordinary as possible, so that the horrors of the story will pop out all the more strikingly. Here the horrors seem less frightening and more grotesque. It's also a solid half-hour too long, turning a tense, weird little grand-guignol into something that actually gets a little dull from time to time.