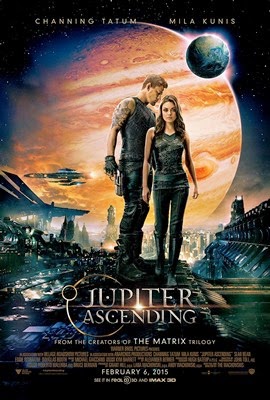 Jupiter Ascending is a terrible, near-unwatchable film and you should probably avoid seeing it. It's a big-budget Summer blockbuster, produced by Warner Bros and Roadshow but then delayed from Summer 2014 to February 2015. I can see why they delayed it: if you know you've got a dead-cert dog on your hands, releasing it in January or February means you can shift its inevitable losses into next year's balance sheet and make your finances look better on paper. The shareholders are happier, and you've then got the next Summer to make up the losses with some more profitable, more tidily produced tentpoles.

The irony is that this is a disaster Warner Bros brought upon themselves: they asked the Wachowskis to write a direct and new ongoing science fiction franchise all the way back in 2009, and five years later the brother and sister filmmakers delivered what had been requested: a sort of sexier kind of Star Wars, replete with alien princesses, dashing space pilots and laser gun shootouts. The problem is that it's all gone horribly wrong. Jupiter Ascending successfully delivers beautiful production design and a nice Michael Giacchino musical score. Pretty much everything else has been cocked up.

So let's start with the plot, which is more than the film does: an hour into the action they're still failing to properly explain what's going on. Jupiter Jones (Mila Kunis) is a Russian-English illegal immigrant working as a cleaner in Chicago. Three rival teams of aliens are trying to either kidnap or murder her, because it turns out that she is the reincarnation of an alien queen and her return means the loss of power for her three rival heirs. Each heir successfully kidnaps her in succession, and each time she has to be rescued by Caine Wise (Channing Tatum), a human-dog hybrid with a pair of rocket boots.

If that sounds like you're going to be stuck watching three variations of the same scene in a row, you'd be pretty much right on the money. And repetitive action would be one problem; it's compounded by the Wachowski's mysterious new inability to shoot a coherent action scene. The editing is too frantic to make proper sense of what's going on in most scenes, and the shot-to-shot transitions are bizarre and disorienting. It's hard to believe these are the same filmmakers who directed The Matrix.

In broader terms the narrative is generally incoherent. Its seven-month delay from July to February makes me rather suspicious that some executive at Warner Bros got scissor-happy in the editing room: this feels like a three-hour movie that's been shaved down to a shade over two hours, pretty much by cutting out all of the talky scenes that explain what's going on. That said, I don't think a future directors' cut will save it. What dialogue we get in this theatrical cut is uniformly asinine and pretentious, and the plot - once we understand it - is remarkably dull.

The cast may basically be split into three groups. The first group consists of the likes of Mila Kunis and Sean Bean: actors who are clearly capable of delivering strong performances, and who have demonstrated that capability in the past, but have clearly realised how bad this film is simply stopping trying to emote. The second group consists of actors like Channing Tatum: he gets a silly flying dog boy role but commits to it one hundred per cent, and manages to give the film whatever shreds of dignity still hang off its carcass. Then there are the actors like Eddie Redmayne, who - like group one - have worked out how bad the film is, and have decided to over-act horribly, either to give the audience something to laugh at or as a desperate final gambit to get fired from the project.

Redmayne is genuinely awful in this film. Some critics have defended his performance, but it really is one of the worst things I've seen on screen in several years. The audience last night wasn't laughing with his performance, but at it. It's astounding that on Sunday night he received an Academy Award for Best Actor - albeit clearly not for this film. Somebody needs to drive to his house, rip the Oscar from his hands, firmly tell him 'No!' in their best 'bad puppy' voice, and leave him to think about what he has done.

The production design is rock-solid. This is a stunning visual tribute to French bande-dessinees like Metal Hurlant and its ilk. The various starships and space palaces are baroque and intricate, and visually quite distinct from other American SF films. It all deserves to decorate a much better movie.

Some times a big budget movie comes out, and the critics in general savage it mercilessly, and then when you watch it yourself you find that it's actually a pretty great entertaining film. Jupiter Ascending is categorically not one of those cases. This is, hand on heart, the worst film I've sat through in a cinema in years.
Posted by Grant at 9:41 PM