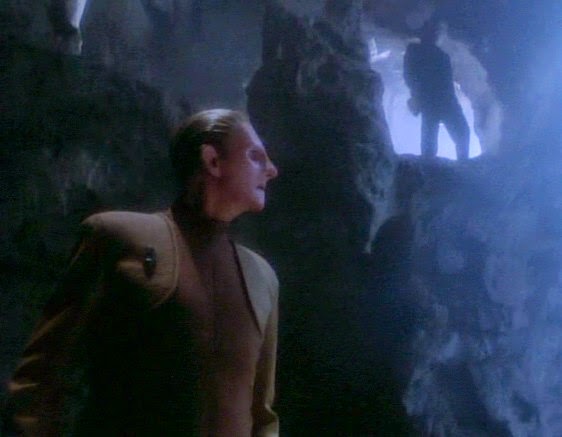 An explosion rips through Deep Space Nine's promenade, incinerating the tailor Garak's shop and almost killing Garak (Andrew Robinson) himself. Odo (Rene Auberjonois) investigates, finding a trail that leads from the station to an alien assassin, the Romulan Empire, and Garak's own murky past as a Cardassian intelligence agent.

It's a pretty clear demonstration of Garak's popularity among Deep Space Nine's writers that an entire two-part storyline will become dedicated to the character, sidelining the bulk of the series' stars in the process. It's not difficult to see why. Andrew Robinson gives a wonderfully creepy performance, all smiles and ingratiating courtesy on the outside but with an inner cruelty that's always been visible just under the surface.

Of course Garak on his own is not enough to form an episode, so writers Rene Echevarria, Robert Lederman and David R. Long cleverly match him with Odo. It's a remarkably clever manoeuvre: the two characters have never really been paired up before - it's usually Garak and Bashir - and Odo's blunt sarcasm and drive to uncover the truth contrasts nicely with Garak's constant attempts at obfuscation. Both actors are at their best, particularly Auberjonois who seems to be relishing getting such a strong, character-driven narrative in which to perform.

What shifts the episode from being good to being excellent is the manner in which it picks up on several hanging plot threads left by earlier episodes. "Defiant" revealed that Cardassia's Obsidian Order was building its own starships without the authority of their central command. At the same time episodes like "Visionary" have made it clear that the Romulans aren't very comfortable with the idea of the Dominion on the Alpha Quadrant's doorstep. And of course all of the hints and mentions of Garak's past come properly into the foreground for the first time.

It is all interwoven incredible well. The episode begins as a mystery, graduates to a political thriller, and by its climax is a jaw-dropping epic on a level that few Star Trek stories have matched. Star Trek was always pretty good with cliffhangers: this had a really strong one. 14 good episodes out of 20 gives Season 3 a quality ratio of 70 per cent.
Posted by Grant at 9:05 AM