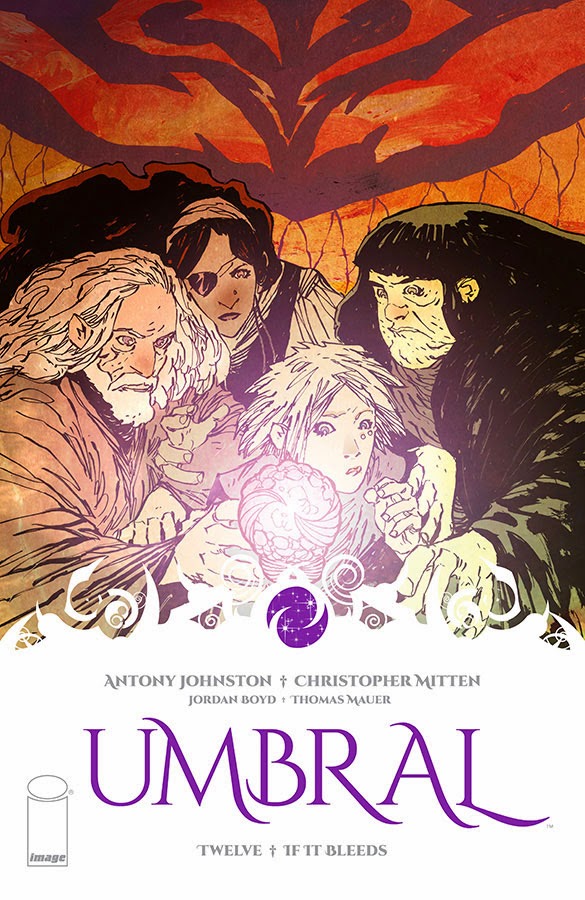 Umbral's second story arc comes to a close in typically dramatic fashion. Twists are turned, climaxes are had, things are set up for issue #13 in a couple of month.

Antony Johnston impressed me enormously in 2014 by writing not one but two sensational ongoing comic books. The Fuse wound up being my favourite book of the year, and to be completely honest Umbral wasn't that far behind. A young thief named Rascal goes on the run when a demon takeover kills a city's royal family. This second arc has seen her on the run across the wilderness with an old wizard, a suspiciously dangerous trader and a gypsy assassin. The characters are well crafted, and the fantasy world excellently realised. Johnston has also plotted it with a canny eye for unexpected revelations and twists, and that's made it addictive reading.

Christopher Mitten's artwork really sells the dark fantasy angle, giving everything a sort of scabby, worn-out look. It eschews traditional comic book artwork for something a bit more grounded and realistic. His depictions of the shadowy demons are top-notch.

Issues #1-6 are already available in an inexpensive trade paperback edition. Issues #7-12 are collected into a second volume later this month. If you like fantasy, you really should be reading this comic. (5/5)

The "Maelstrom" arc continues, and showcases everything that's been good about this volume of Aquaman. Fast-paced action. Atlantean history and myth. Arthur struggling to rule over his kingdom. A gradually-established supporting cast of characters. A clever use of the broader DC Universe. It's not the best comic that DC is publishing, but it's a constantly entertaining one and showcases that - as a character - Aquaman's a lot more interesting that the constant jokes would have you believe. (3/5)

"Endgame" continues to surprise and thrill me. It's becoming very obvious that this isn't simply a great Joker story. It's a climax to everything Scott Snyder has been writing since the New 52 kicked off. Gotham City is collapsing in the face of the new and enhanced Joker virus, and everything Batman does to find out what's really going on leads him towards answers he simply doesn't want to believe. There's a claim in this issue that the Joker is actually immortal, and has been around for centuries, and while it's near-impossible to believe it's true (Batman certainly doesn't believe it), Snyder makes a very convincing argument nonetheless. This is a great issue all round: great plot developments, a fantastic cliffhanger ending, and possibly the creepiest page of the Joker I've ever seen. (5/5)

Two things immediately occur about this issue. Firstly, only a week after I commented that a Bluebird/Spoiler book would probably be a cool idea, Batman Eternal has both characters sharing scenes and rapidly bonding as friends. This gives me enormous hope that DC's going to give me exactly what I want for once. Secondly, this issue finally sees Eternal catch up with that odd single-issue storyline of Batman produced in the middle of "Zero Year", that showed Batman rescuing Spoiler from Selina Kyle. This is a really strong issue. (4/5)

This is yet another strong issue for Genevieve Valentine and Garry Brown's bold new take on Catwoman. The sexualised imagery is gone, as are the silly storylines and weak characterisation. Instead we're now four issues into a sprawling character-based crime epic: Selina Kyle has abandoned her Catwoman persona in order to take over and unite the entire Gotham criminal underworld. It's brilliantly written, and each issue develops the situation in a gradual fashion. Garry Brown's artwork is perfectly suited to this as well: a little gritty, very expressive, and miles away from the awful cheesecake pictures Selina with which is usually saddled. (4/5)

While Catwoman expands the Batman line into serious crime drama, Gotham Academy continues to carve out its niche as the Harry Potter corner of Gotham City. Teenagers in a boarding school investigating strange mysteries and chasing ghost sightings - there are even hidden passages and secret doors involved. In the wrong hands this could all seem ridiculously twee, but Karl Kerschl's manga-esque artwork and Cloonan and Fletcher's genuinely funny script manage to lift it above the obvious and make it a really fun, enjoyable book. A last page reveal suggests this book is about to get much more closely related to Batman himself. (4/5)

This issue continues what I assume is going to be the overall trend of The Eternity War: complete continuity porn for Masters of the Universe fans. This issue features He-Man leading an army of snake people against Hordak's forces, who are led by Hordak's tentacle-eyed lieutenant Mantenna. Meanwhile Man-at-Arms takes to orbit to blow up Hordak's orbital attack platform. If all of this makes your eyes glaze over with boredom or confusion, this probably isn't the book for you. To be honest, I'm not entirely sure it's the book for me. I've enjoyed quite a bit of DC's He-Man material in the last few years, despite its ups and downs. I worry this miniseries is going to be one of the down periods. It's all a bit too on-the-nose and predictable now. (2/5)

Dana finally confronts Edmund Holt about what he said or did to her son. That doesn't seem to end too well. At the same time her sister Em has teamed up with reporter May Tao and occultist Blaine Abel to find out what happened to her ex-lover Adam Weimar. That really doesn't seem to end too well. This is a generally slow-paced, very measured comic, but in cases like this when events finally come to a climactic head, it demonstrates why sometimes that slow pace can really work in a book's favour. I really can't wait to read what happens in issue #28. (4/5)

The first story arc seems to mostly wind up here, although it's a little unsatisfying. Thor Odinson finally catches up with the new Mjolnir-wielding female Thor, with the predictable Thor versus Thor fistfight, although we still have no answer as to who this new Thor is. I get the appeal of giving the readers a mystery, but at the same time I really appreciate actually knowing who the protagonist of a story is. At the moment, and despite all of the book's strong qualities, I'm finding it harder and harder to keep involved. It doesn't help that this whole "female Thor" arc doesn't feel like an organic storyline yet, but rather a simple sales stunt - much like replacing Steve Rogers with Falcon over in Captain America. (3/5)