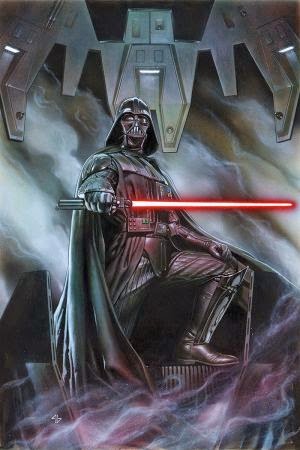 Darth Vader #1, written by Kieron Gillen and illustrated by Salvador LaRocca, picks up shortly after the events of the original Star Wars movie. The Death Star has been destroyed, thanks in part to Vader's decision to let the Millennium Falcon escape with a homing beacon attached. He is disgraced in Emperor Palpatine's eyes, and forced to take his orders from an intermediary.

This is a book with good and bad elements. Kieron Gillen has written Vader perfectly: he's a constantly simmering pot of rage, with the potential to boil over at a moment's notice. One key scene demonstrates brilliantly the difference between the Jedi and the Sith: differences in mind-set, powers and purpose. Others show Vader's calculating nature and keen intelligence. LaRocca's artwork is highly effective and reflects the motion picture designs of the characters and settings very well. In short, it looks and feels like Star Wars. That's surely the goal of any spin-off comic book like this.

With good comes bad. Put simply this issue is packed with so many guest appearances and continuity references it's mired in it. The issue begins with Vader visiting Jabba the Hutt on Tatooine, moves through a meeting with Palpatine and ends with a conversation between Vader and Boba Fett. Throughout it strings together references and flashbacks to both the original Star Wars and the first issue of Marvel's main Star Wars comic book: it presents a Vader who has learned of Luke Skywalker's existence, realised he wields Anakin Skywalker's lightsaber, and is dispatching famous bounty hunters to track him down. It's this sort of wedged-in continuity porn that irritates me. I vacillated on buying the main Star Wars comic, and actually chose not to when I saw that the second issue featured a pre-Empire Strikes Back confrontation between Luke and Vader. There's a whole galaxy of things Vader could be doing on the Empire's behalf between movies - tracking down Luke isn't something I feel I need to see.

So this book has a lot of good, but buy did it irritate me by the end. I'm tentatively onboard, but Gillen needs to show some new story ideas instead of just tying knots with all the threads between movies. (3/5)

Under the cut: reviews of Batman Eternal, Doctor Who, FBP, Justice League 3000, Thor and Wild's End.

This is sadly another issue where all of the momentum and drive gained in previous weeks blows through the bottom of the book like a brick through a wet paper bag. There's more supernatural stuff, and the return of both Jim Corrigan and Batwing, and a little bit more between Bluebird and Spoiler (seriously: these two young women have been having a conversation for three issues now). It ends with Batman on the trail of the mastermind who seems to be behind the whole criminal plot: except I'm almost certain it's just another chain to get me and others buying the book for another seven issues. (2/5)

There's an interplanetary war being waged above the planet Earth. Two of the Doctor's three companions appear to be shaky, gibbering wrecks. The third believes her mother has returned from the dead. This is a solid and very entertaining conclusion to the latest story, combining moments of sadness and levity as well as throwing in a few neat science fiction ideas and a laugh-out-loud climactic revelation. A variety of factors have led me to stick with following just one of Titan's ongoing Doctor Who comics. I don't think I've made a bad choice: this has been a consistently strong adaptation. (4/5)

Better late than never, I suppose. A year and a half into this fairly messy and haphazard story of secret conspiracies and haywire physics, we've finally reached something approaching a narrative direction: the universe is passing the point of collapse, and saving the planet Earth means generating our own dark matter to kickstart the universe back into action. It's great, big ideas science fiction, with some good character work and solid illustration. It just feels so late in the day. Sales for this book are so low I continually expect each issue to be the last. (4/5)

Giffen and DeMatteis' strange quest to revive Justice League International in the 31st century continues. This issue, with unexpected and slightly jarring art by Andy Kuhn, fills in some gaps in how Ice came to be in the year 3000. It also features more shenanigans with Blue Beetle and Booster Gold, a segue through cult favourite Kamandi and a final page revelation that had me in stitches. This book is getting a soft relaunch in June as Justice League 3001. I really hope some new readers give it a shot. (3/5)

So we're five issues into this new Thor and we still don't know the identity of the new female incarnation of the character. This is a bigger problem that I think many readers realise, since she's being represented as a viewpoint character - except with no understanding of who she is, or where she has come from, it's rather difficult to accept her as that viewpoint. For me the book rises when it tracks characters with whom I'm already familiar - Thor Odinson, his mother Freyja - and then sinks like a stone when it returns its focus to its anonymous protagonist. Guest artist Jorge Molina does a good job filling in for regular artist Russell Dauterman. (3/5)

The final issue of Wild's End provides exactly the sort of conclusion that I was expecting: a resolution to the night-time chase across the countryside, a temporary victory, but a strong indication that there's further danger on the horizon. Like Abnett and Culbard's other recent miniseries Dark Ages, it concludes with the door wide open for a sequel. That's a tiny bit unsatisfying, to be honest. I have really enjoyed this miniseries: perfectly-pitched artwork, a brilliant use of historical and geographic setting, strongly defined characters and great dialogue. (4/5)