Nostalgia Time, 3 February 2015: In the Mouth of Madness, The Three Caballeros 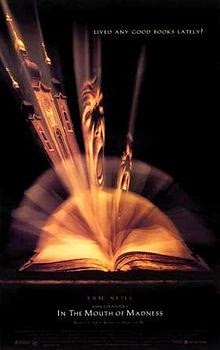 It's Nostalgia Time, where we celebrate pop culture anniversaries like nobody's business. Today sees the anniversary of two films that probably couldn't be any further apart: John Carpenter's 1995 horror movie In the Mouth of Madness, which turns 20 today, and the Walt Disney animated film The Three Caballeros, which turns 70.

In the Mouth of Madness is a Lovecraft-inspired horror movie directed by cult favourite John Carpenter. Shot in Toronto on a budget of just $7 million dollars, it represented a fresh hit for the Carpenter, whose career had been slowly falling into the doldrums after a string of early smash hits including Halloween and The Thing. The film starred Sam Neill as insurance investigator John Trent, who is dispatched to investigate an author who has gone missing without filing a copy of his latest novel with his publisher. Once in the strange town of Hobb's End (previously thought to be fictional) Trent is sucked into a nightmarish apocalyptic world.

‘You have a main character who is an incredibly cynical man,' said Carpenter (in Gilles Boulenger's John Carpenter: Princess of Darkness). 'He doesn’t believe in this horror crap, and he doesn’t believe that a horror writer can become God; and suddenly he finds himself caught in this horror writer’s world, realises it’s true and goes crazed mad from it. So it says both that horror is kind of cheesy on one level but at the same time, if you’re tracking it, you can become crazy. That’s in the premise and I just pulled every bit of that idea out as much as I could.’ In the Mouth of Madness is a great film: criminally underseen at the time, but now regarded as one of Carpenter's better works.

Celebrating its 70th anniversary today is a very different film: the Walt Disney animation The Three Caballeros. In 1941 those in the USA State Department became concerned that Latin American countries might side with the Axis countries. As part of a goodwill gesture they paid for the Walt Disney Company to send filmmakers and animators to South America, and to then produce a portmanteau film (basically a collection of shorts) based on South American culture and themes. The result, Saludos Amigos, was remarkably short; at 42 minutes it remains the shortest of Disney's animated features. It was, however, remarkably successful in attracting Latin American audiences. Appreciating the film's success the State Department gave a financial guarantee for Walt Disney to produce a second South American collection of shorts: and that film, The Three Caballeros, is what celebrates its 70th anniversary today.

The Three Caballeros is a mixed bag, as Disney's portmanteau films often were, but it does still contain a few highlights - not the least of which is a surreal, dreamlike escapade for Donald Duck in the aptly titled "Donald's Surreal Reverie". The Walt Disney Animation Studio always had a penchant for strange 'drug trip' sequences: this film has one of the best.
Posted by Grant at 9:18 PM