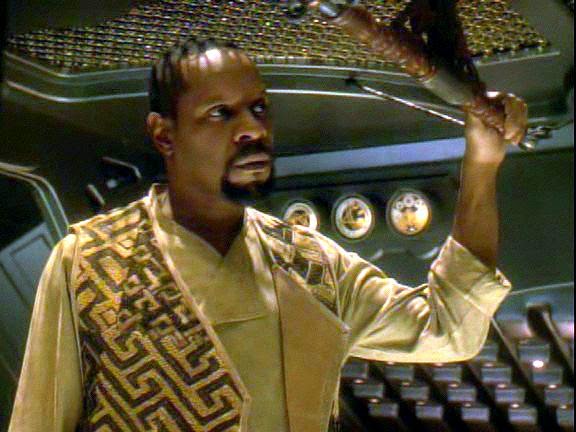 Commander Sisko (Avery Brooks) decides to re-construct an ancient Bajoran spacecraft to test the claims that it somehow travelled all the way from Bajor to Cardassia at sub-light speeds. Meanwhile Dr Bashir (Siddig el Fadil) anxiously awaits a visit from Dr Elizabeth Lense - the one student who beat him at Starfleet Academy.

"Explorers" is a bit of an odd episode really, since it's lacking in any serious sort of jeopardy or high stakes drama. In the one storyline you have Sisko hand-crafting an ancient Bajoran ship and using it to spend quality time with his son. In the other you have the always-competitive Bashir stressing out over meeting a doctor smarter and more qualified than he is. No one is at any real risk of death. No one's going to go to war. There's no struggle to make first contact with an alien species or a crisis threatening to destroy the station. There's just day-to-day life onboard Deep Space Nine. I kind of like that.

To be honest Sisko's building of the Bajoran solar ship is just an excuse to get him and Jake (Cirroc Lofton) into a room for an episode to talk and develop their characters. Jake turns out to be a fairly talented writer, and has been offered a fellowship to study creative writing back on Earth. It's a marvellous choice for the character, and further distinguishes him from Star Trek's last teenage protagonist Wesley Crusher. I've written about how much I love the Siskos' relationship many times, but it always bears repeating: this is one of the most natural and loving father-son dynamics television has ever seen. Ben Sisko, a career officer, learns that his son wants nothing more than to be a writer, and he's immediately supportive of that. It's also great to see Jake, getting older every season, showing genuine concern that his father is lonely. He even sets him up on a date with the soon-to-be-seen freighter captain Kasidy Yates.

Just as the Bajoran ship was an excuse to pair up the Siskos, so Bashir's concerns over Lense's imminent arrival is an excuse to pair him up with Miles O'Brien (Colm Meaney) for an episode. Just as Ben and Jake Sisko are one of TV's great father-son pairings, so Miles and Julian are one of the best male friendships. Colm Meaney and Siddig el Fadil (soon to rename himself Alexander Siddig when Season 4 kicks in) have great screen chemistry and marvellous comic timing. Scenes in this episode, in which they drunkenly sing "Jerusalem" before awkwardly admitting how close their friendship has become, are masterful.

Two debuts in this episode: firstly Sisko has grown a goatee, that will remain on his face for the remainder of the series. This is actually a minor relief: like Commander Riker in The Next Generation, Sisko always looked more natural with a beard. It's been odd going back and watching the first two-and-a-half seasons where he's beardless. Secondly, Chase Masterston makes a brief appearance as the Bajoran hostess Leeta. She's just here for a comedy bit, but it obviously made an impression on the producers and writers because she appears in another 16 episodes over the next four seasons.

It's nice to just have some down-time in this series, particularly after the major events of "Improbable Cause" and "The Die is Cast". You wouldn't want an episode of Deep Space Nine like this every week, but from time to time it's exactly what the series needs. I loved it. We're 22 episodes into Season 3, and 16 episodes have been good. That makes for a quality ratio of 73 per cent.
Posted by Grant at 9:22 AM