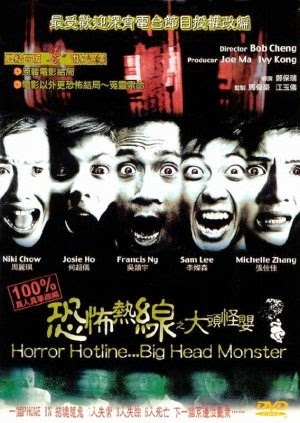 An American TV crew arrives in Hong Kong to profile "Horror Hotline", a late-night radio chat show whose listeners call in to share their own experiences of ghosts, supernatural experiences and the occult. A call comes through describing a demonic baby with eight eyes and a giant head, and after that call comes through a whole wave of similar calls are received. The American journalist Mavis (Josie Ho) and local radio producer Ben (Francis Ng) team up to investigate.

Really you'd think that all you need to judge this film is a quick glance at the title, an understanding that it's a cheaply made Hong Kong horror movie, and quick read of the premise. It sounds like the tackiest kind of D-grade movie, less scary than it is hopelessly silly. To an extent it is rather silly. It's also remarkably effective in places, and is one of those rare pulp horror movies that's significantly better than it has any real right to be.

Francis Ng and Josie Ho do reasonable jobs in the lead roles, but really a lot of the film's strength comes down to how it is edited and shot. This was the second feature for director Soi Cheang, and he's since gone from strength to strength with films like Motorway, The Monkey King and the particularly strong Accident. You can see his strong visual style and sense of pacing here: despite the low budget this is a wonderfully atmospheric film. It cleverly doesn't reveal the titular monster during the bulk of the running time. What the viewer does see is hidden in shadow or glimpsed in unexpected little moments.

The film is admittedly let down in its climax, which draws very heavily on an earlier American horror film. Explaining which one would spoil it, but certainly it's a lapse in originality that means the film concludes with disappointment rather than excitement. It's a real shame, because the rest of Horror Hotline is a unexpected low-budget gem.

Hong Kong doesn't have the greatest reputation for film horror, often substituting genuine creepiness for misplaced humour or over-the-top and unconvincing visuals. For the most part Horror Hotline sidesteps all of the standard genre pitfalls. It was a genuine surprise.
Posted by Grant at 9:44 PM