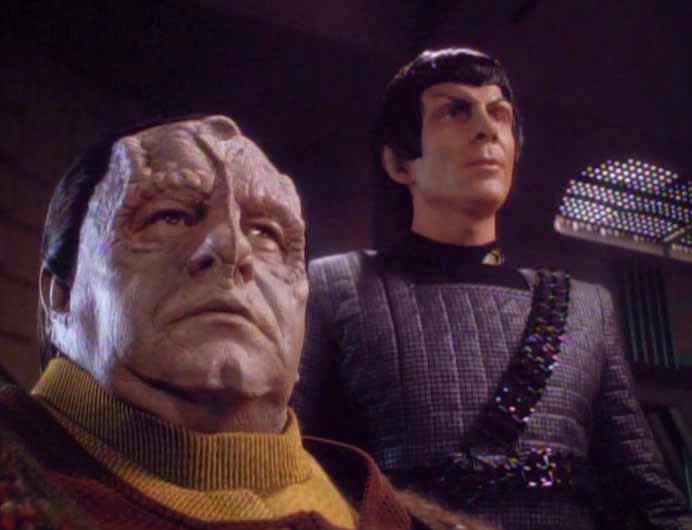 Elim Garak (Andrew Robinson) has elected to reunite with Tain, the Cardassian spymaster who exiled him to Deep Space Nine, and subsequently tried to have him killed. Together they are participating in a massive secret strike: a combined fleet formed by the Cardassian Obsidian Order and the Romulan Tal Shiar to destroy the Founder's home world and eliminate the Dominion threat before it can reach the Alpha Quadrant. Only Odo (Rene Auberjonois) can convince Garak not to go through with the plan - but Garak has orders to torture Odo for everything he knows about his people.

"The Die is Cast" is a large-scale epic climax. It begins with an unprecedented sight: a massive fleet of Cardassian and Romulan starships flying past Deep Space Nine and into the Bajoran wormhole. It ends with an entire section of the Star Trek universe irreperably changed. In the middle there is the single-largest starship battle seen in Star Trek up to this point. Some episodes are more significant than others: this is one of Deep Space Nine's most critical episodes ever.

Perhaps the most jaw-dropping aspect of this episode was that it was never originally intended to be made at all. The previous episode, "Improbably Cause", was a strong episode with a weak ending, and the last-minute solution was to remove that ending entirely and extend the whole story into a two-parter. This decision was made so late in the day that actors had already been hired to make "Through the Looking Glass", and so "The Die is Cast" was hastily slotted in after that, and "Looking Glass" moved forward in the broadcast schedule.

It was a master stroke to expand "Improbable Cause" in this fashion. "The Die is Cast" pushes Garak and Odo's relationship even harder, with Garak forced by Tain to torture Odo for information on the Founders. The scenes in question get rather confronting by Star Trek's standards. Odo, forced by experimental Cardassian technology to retain his solid form against his will, simply begins to dry out, crack apart and disintegrate. By the episode's end there isn't forgiveness between Odo and Garak, but there is an understanding. They've both gone through an experience they'd rather forget.

"The Die is Cast" also allows the series to give Season 3 a solid through-line in regards to the Dominion. They've been a semi-regular presence, referred to in numerous episodes, but rarely appearing. Here we see two things: firstly the respective secret services of Romulus and Cardassia take the Dominion threat into their own hands, and secondly those same secret services getting annihilated for their troubles. The Season 2 finale, "The Jem'Hadar", showcased just how dangerous the Dominion could be. "The Die is Cast" more than confirms it. The Founders not only knew the Cardassians and Romulans were coming, they actively encouraged it. We're left with a background presence transformed into a terrifyingly close threat. That the Dominion have infiltrated into two different Alpha Quadrant superpowers without being detected raises some disturbing concerns as well: if changelings can work their way into the Cardassian Union and the Romulan Empire, where else could they be?

The changeling who masqueraded as the Romulan commander Lovok is the one who frees Odo and Garak during the climax, telling Odo 'no changeling has ever harmed another'. This is the third time this phrase has been uttered this season: it's almost as if they're building up to something.

This is the 15th good episode of Season 3 out of 21 episodes so far. Five episodes remain this season. The quality ratio is up to 71 per cent.
Posted by Grant at 9:09 AM