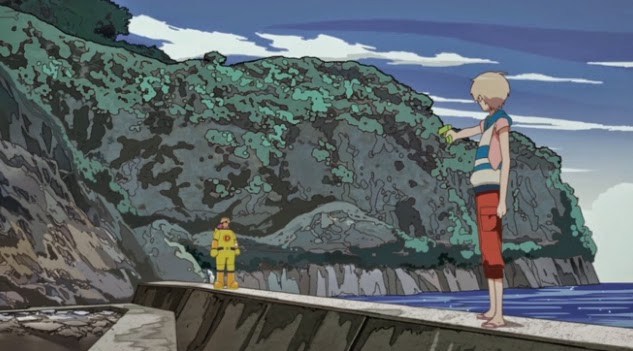 What an astonishing difference one episode makes. After eight amiable episodes of teenage friendship and sea bass fishing, with a vague background about mind-controlling aliens in the ocean and secret government organisations, everything in the background suddenly explodes to the front. This is the series-changing episode I was expecting last time, building on the firm foundation of characters it's developed for the first two-thirds of the series and setting up a wonderfully dramatic climax.

I had this series pegged as a comedy in my head, because the science fiction elements seemed inconsequential and the character work didn't seem particularly dramatic. This episode isn't very funny at all, but is packed with little moments of drama, action and growing suspense. The government agency DUCK has taken over the town of Enoshima and forced its residents indoors. Coco and Haru head out into the open ocean to shut their fellow alien JFX down, with terrible consequences. Haru ultimately takes over Enoshima, using his mind-controlling water pistol to force all of the residents out of town.

It's a great episode, easily the best in the series so far. My question is: would it be this good had the first eight episodes not moved with such a slow pace? We know the characters so well now. We're invested in their lives. We care enough that this episode jumps past the general entertaining weirdness stage and leaves us properly invested on an emotional level.

It's a great episode for Akira, who entered the series as a stoic and vaguely unlikeable character and is now firmly one of the lead characters alongside Natsuke, Yuki and Haru. He's great here, keeping his deadpan demeanour but clearly caring for Haru very much. He had a great conversation last episode with Haru, and he follows it up this week with a perfectly-pitched encounter with Yuki. The fact that his best friend is a duck is just the icing on the cake.

Not only does this episode finally fulfil the promise of the last few cliffhanger endings, it manages to up the ante again leading into the next episode. Haru is alone in Enoshima, DUCK's agents are everywhere, but Haru's friends are on their way to help him out. Three episodes to go, nine already gone, and seven of them good: the quality ratio is 78%.
Posted by Grant at 9:28 PM