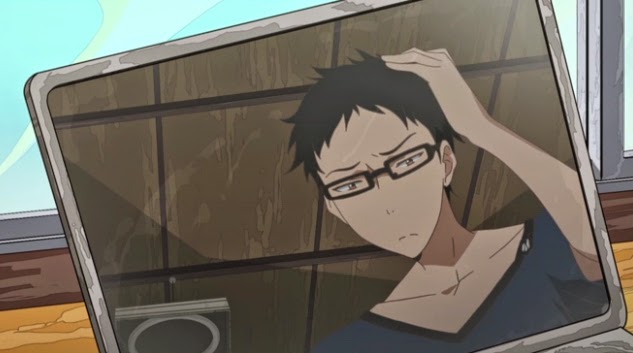 Sakura has run away from home, sending her family and friends out to search for her. While the search continues Akira finally reveals his true identity and mission to Haru and his sister Coco.

So after a weird lapse in momentum last episode, Tsuritama finally progresses its main plot again. After lurking around for seven episodes Akira finally gets explained: he's a member of the anti-alien investigation force DUCK, send to Enoshima specifically to gauge whether Haru, Coco and the mysterious underwater alien JFX are a threat to humanity. At the same time we get some much-anticipated detail on JFX as well, and that ties in nicely to Haru's water pistol and whole pile of weird goings-on in the first seven episodes.

It really does feel like a bridge has been crossed here: there are four more episodes to go, and it's like the writers have seen the horizon coming and slammed their feet onto the accelerator. The episode's cliffhanger ending is very similar to last episode's, only on a much bigger scale and a whole additional level of ominous.

There is some really nice character work going on in this episode as well. Natsuke and Sakura are reunited, and reconcile. Sakura's lingering discomfort with her father dating a woman is addressed, and after the fairly horrible slapping incident in episode seven this episode does an awful lot of badly-needed damage control. I don't think I hate Natsuke any more - I certainly did last week, but now he seems genuinely remorseful and the root of his antagonism seems to be getting addressed.

Similarly Yuki gets some nice development as he admits he's actually jealous of Natsuke's life and circle of friends. It's nicely ironic, since by hanging out with Natsuke and Haru and developing his own social skills Yuki has become the exact sort of person he thinks he's envying. He's really come a long way in eight episodes.

I'm still not sure what I think of Tsuritama overall. Obviously I like it, otherwise I'd have stopped watching it, and I've found the majority of its episodes half-decent or better. It just feels like there's something missing: not quite enough narrative momentum to keep it going. At this stage it's looking like the events of the past eight episodes could easily have been expressed in three or four.

Still and all, this is a solid and enjoyable episode, the sixth such episode in the eight I've watched so far. That gives the series a quality ratio of 75 per cent with four more episodes to go.