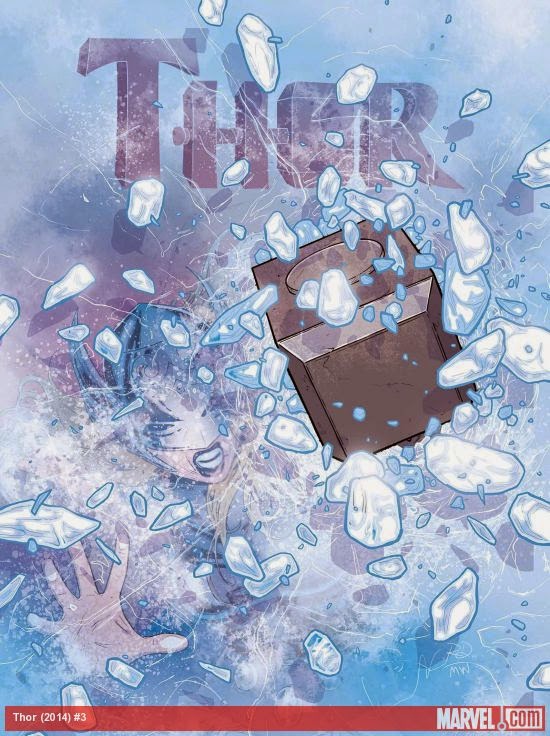 So we're three issues into Marvel's relaunched Thor, which distinguishes itself from the previous (and rather excellent) volume by giving Mjolnir to a masked woman and leaving the original Thor Odinson comparatively powerless. It was a great concept in terms of generating publicity ("Thor's a woman!") but so far it's proving slightly less captivating in practice. We're three issues in, yet we know next to nothing about the new Thor. Obviously there's a big reveal to come, but given how little has happened in three issues it's becoming harder and harder to care.

It's annoying because things started off so well: Odin and Frigga are at odds over how to rule - and indeed who should rule - the realm of Asgard, Thor is a seemingly broken man following the events of the Original Sin miniseries, a masked woman is running around weilding Thor's hammer, Malekith is teaming up with the Frost Giants and the Roxxon Corporation continues to make trouble back on Earth. Now, more than 40 pages later, we haven't had any update on tensions in Asgard, the masked woman is still just an anonymous masked woman, the Frost Giant's attack on Roxxon has gone on for two issues without significant developments and Thor has only just turned up to find out who the hell took his hammer. It's the sort of decompressed storytelling that is absolutely murdering monthly comic books.

Despite the glacial pace, Jason Aaron is still writing strong dialogue and characterisation. New artist Russell Dauterman is doing a sensational job - if nothing else this is a very beautiful book to read. I just wish it would go somewhere a lot faster than it is. We're paying US$3.99 an issue for this stuff. We deserve a story. (2/5)

Under the cut: reviews of Batgirl, Batman Eternal, Copperhead, FBP: Federal Bureay of Physics, The Fuse, Prometheus and Wild's End.

This new run of Batgirl is, for the most part, proving absolutely adorable. There are basically two things that are impressing me. The first is Babs Tarr's incredibly appealing artwork, that completely sells this new take of "twentysomething hipster" Batgirl without ever seeming self-consciously hip or tedious. The second is the density of the storytelling: we're getting a lot more panels per page than average here, and that's make for a much longer read per issue. In short: it's better value. My copy came with another of DC's excellent Darwyn Cooke covers as well, which was a nice bonus. But, and this issue comes with a big "but", things are let down immensely by this issue's transphobic villain. The creatives involved have all acknowledged the problem and apologised in a very classy fashion, so it hasn't ruined my enjoyment of the book as a whole. Still, given that this used to prominently feature a transgendered character in such a natural, relaxed fashion, it left a bad taste in the mouth. (2/5)

The Bat-team go after Commissioner Jason Bard, while Vicki Vale continues her investigation into his background. This is a big jump up in quality compared to last week, and pushes the plot forward in an excellent fashion: we get Bard's background, and an explanation for his actions. At the same time the book gives what seem like pretty massive hints as to Eternal's ultimate villain, and it's a choice of whom I wholeheartedly approve. We're back on track I hope, and I'm keen to see the next hurdle: the Riddler. (3/5)

Clara's murder investigation is complicated, while her relationship with Zeke is strained a little further. We get some nice background information in this issue, that fleshes out several of the characters nicely while providing a better perspective of the kind of world on which this story is based. There's a beautiful scene early into this issue, where a local land baron calls up Clara's former employer to see about having her removed from her post: the catharsis in this scene is almost worth the cover price alone. This is a solid and entertaining space western, so if you're after that sort of thing - or are a Firefly fan who simply can't let go - this is a comic for you. (3/5)

I'm not sure if it's that this book is finally kicking into gear, or if the end is in sight and things are picking up to a climax as a result. Either way, this book just got an injection of adrenalin that it badly needed. Things are pulling together, the characters all seemed pointed in the right direction and it ends on a colossal climax. I do hope this is the start of an arc and not the start of the end: FBP has had so much potential that it hasn't quite managed to exploit, and it's now managed to finally hit on its premise with a proper focus and energy. (4/5)

It's the second instalment of "Gridlock", the second story arc for 2014's best new science fiction comic book. The autopsy of a dead illegal drag racer sends the investigating police officers into the dangerous precinct of the Fuse known as "Smacktown". This is great: it fleshes out the cast even further, it explores new aspects of the setting, it throws up a bunch of interesting science fiction ideas, and it manages to do all of that while telling a well-plotted and suspenseful police procedural. Are you reading The Fuse? If not, why not? There's never been another comic in the three years I've been doing this column where I've given it five out of five for eight issues in a row - that has to mean something. (5/5)

This debut Prometheus miniseries ends with a whimper, tying in seamlessly to the beginning of Alien versus Predator: Fire and Stone - which has been running concurrently - but also rendering itself as a kind of unnecessarily prologue to that comic. We're no closer to a resolution and the overwhelming sense is of having wasted one's time. It looked like it had great potential for a while, but in the end - much like the film on which it's derived - it all boils down to running around like idiots and then dying. I think there's great potential in these 20th Century Fox properties for great comic books, but as we're hitting the last few issues I think Fire and Stone has been a crushing disappointment. (1/5)

It's not just the hilarity of Wild's End's premise that delights me: I can't stop introducing every review of this comic with the phrase "The Wind in the Willows meets The War of the Worlds". What's particularly charming is just how brilliantly English the disparate cast of anthropomorphic animals are. There's a whole typical class structure going on, with all of the characters talking in the most delightfully stereotypical ways. They're all cut from a very broad cloth, but it's part of what gives the comic it's particular charm. It's just adorable. (5/5)