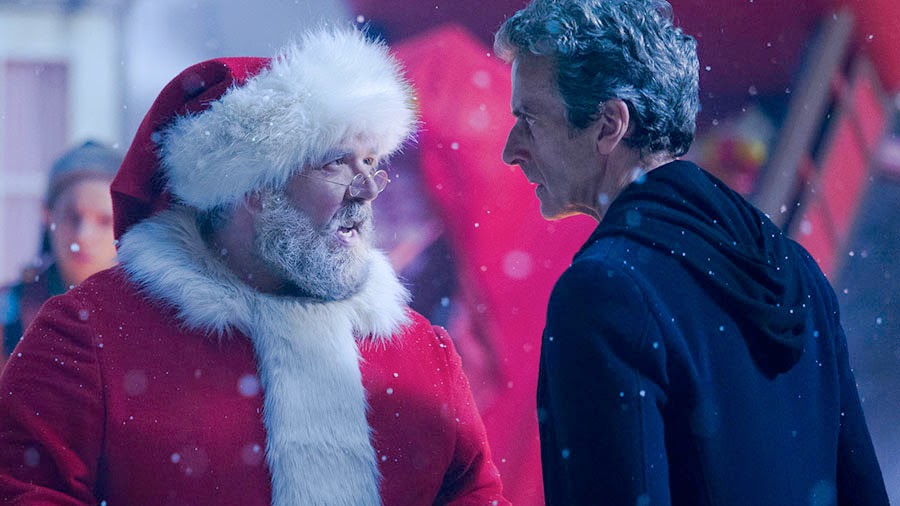 In an isolated arctic research station, a team of scientists are under threat from a terrifying alien menace, and only one man can possibly save them - but is that man the Doctor or Father Christmas?

Since it's revival in 2005 Doctor Who has enjoyed an annual Christmas special: usually a little longer than the average episode, a little more light and festive, and more often than not - in fact almost unanimously - nowhere near as good as the regular episodes that come before and after them. I'm not quite sure what it is about these specials that make their writer - either Russell T Davies or Steven Moffat - throw quality to the wind and just chuck up any old silly tosh onto the screen. While some - "The Christmas Invasion", "A Christmas Carol" and "The Time of the Doctor" - were quite entertaining, others - "The Runaway Bride", "Voyage of the Damned", "The Next Doctor", "The End of Time", "The Doctor, the Widow, and the Wardrobe" and "The Snowmen" - ranged from the disappointing to the actively unlikeable.

So overall I have fairly low expectations for the Christmas special. It's usually got a relatively famous guest star (in this case Nick Frost) and often a slightly silly premise (in this case Nick Frost playing Santa Claus). It's played in broad strokes and offers a more simple, sentimental story than usual. As a result of these expectations, "Last Christmas" came as quite a surprise.

It begins in such a dreadful manner, introducing Santa Claus and his elves on Clara Oswald's roof, barrelling out comedy dialogue faster than the episode requires. The scene is exactly what I expected and feared when the episode was announced and previewed. Then suddenly we're dealing with body horror in an arctic research base, and the episode makes a remarkable jump from the sort of celebrity-based silliness I've come to expect from Christmas Doctor Who to the 'base under siege' horror that used to be the series' stock-and-trade back in the 20th century. It feels like real Doctor Who for a change. Long-time fan and series star Peter Capaldi must have been clapping his hands with glee.

Like the best of Doctor Who it draws liberally upon other sources and mixes them into an entertaining pastiche. In this case it draws so openly that it provides the viewer with a handy on-screen list towards the end. The only reference it doesn't actively name-check is Christopher Nolan's Inception, but that's an inspiration so obvious it doesn't need to be named. Unlike that film, however, "Last Christmas" descends down one rabbit-hole too many and overstays its welcome by a scene (and it's a pretty awful scene at that). So what we ultimately have is an episode that's book-ended by two awful bits, but which rattles along brilliantly in the middle. To be honest I can live with that. Even the inclusion of Father Christmas makes sense, and works well within the episode's context.

The guest cast are uniformly strong. Nick Frost does make a good Santa, and it's nice to see Michael Troughton (son of Patrick) make his Who debut. To my mind the standout was Faye Marsay (The White Queen) as scientific assistant Shona: her comic timing was perfect and her dance moves were adorable. Even with Clara staying onboard the TARDIS in 2015 - which does disappoint me, I must say, given her perfect exit in "Death in Heaven" some weeks back - I'd be very happy to see Shona join the regular cast as well.

In the centre of it all is Peter Capaldi, now very self-assured and confident as the Doctor. He's definitely not "the new Doctor" in my mind any more, simply "the Doctor" - and honestly one of the best ones at that. Season 9 can't come soon enough.
Posted by Grant at 12:35 AM