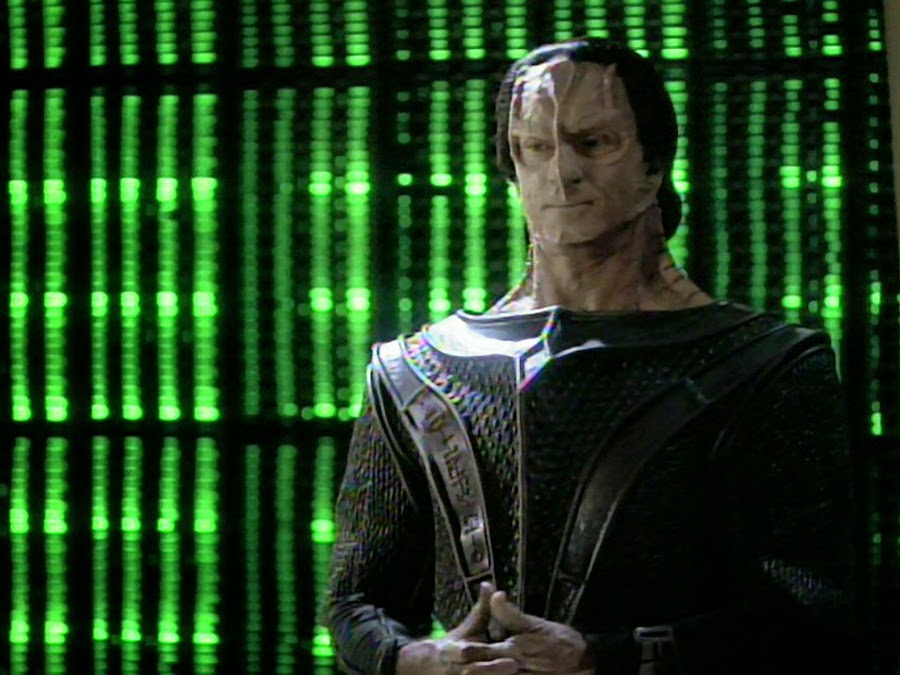 While examining the station's old ore processing facility, Sisko, O'Brien and Jake accientally trigger a Cardassian security system. With the station in lockdown and hurtling towards self-destruct, the DS9 crew race against the clock to shut the system down before it kills them all.

"Civil Defense" (American spelling noted) is a neat little "bottle" episode, using only one extra set and two guest stars. Given those constraints it's a remarkably effective little thriller, as every attempt by Sisko and his officers to improve the situation sets off another layer of Cardassian security. The end is never in doubt, but it's an enjoyable sort of by-the-numbers ride as it goes. It would be almost entirely forgettable, in fact, were it not for its two guest stars: Gul Dukat (Marc Alaimo) and Garak (Andrew Robinson), who pretty much steal the show.

Marc Alaimo is outstanding as Dukat: the character is a clear, simply-drawn villain. He oversaw a brutal labour camp on the station, and personally ordered the deaths of hundreds of Bajoran slaves. He's the Star Trek equivalent of a nazi war criminal, and yet Alaimo plays him with such flair and charisma that audiences started warming to him. Future seasons see the writing team go out of their way to emphasise Dukat's monstrosity, yet Alaimo kept plugging away at the performance, treating Dukat like the hero of his own narrative. The contrast makes him an extremely interesting character to watch. Here he even attempts flirting with Major Kira, which is about the most inappropriate course of action ever - so crass and abominable that Garak calls him out on it.

At this point it seems the series has abandoned any attempt to obfuscate over Garak's history and just allow him to be a full-blown former spy. Here he uses his access codes to wander freely about the station, offering assistance where he can. Like Dukat, he's a character who's boosted immeasurably by the actor playing him. Andrew Robinson gives him just the right combination of charisma and smarm.

Asides from that, events unfold much as one would expect and the adventure concludes in the expected manner. It's not must-see television, but it's an entertaining diversion - and I've always got time for Dukat and Garak. Six good episodes out of seven gives Deep Space Nine Season 3 a quality ratio of 86 per cent.
Posted by Grant at 9:54 AM