Doctor Who: "Sentence of Death" 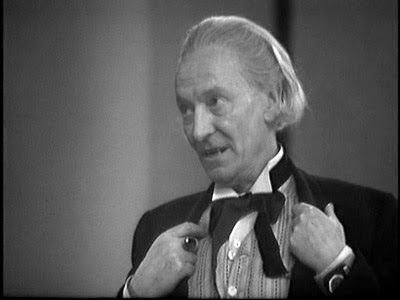 Ian has been clubbed unconscious from behind, and when he wakes there's already an interrogator sitting beside him questioning him about the murdered man next to him. In the city of Millennius those accused of crimes are considered guilty until proven innocent, leaving it up to the Doctor, Susan and Barbara to prove Ian's innocence before he is executed.

Now this is something different: after several episodes of 1950s style serial adventure "The Keys of Marinus" takes an unexpected right turn into the courtroom drama genre. Ian is accused of murder, the Doctor has volunteered to represent him, and Susan and Barbara are out on the streets gathering evidence and interviewing potential witnesses and suspects. It's all a bit odd, to be honest, and doesn't tie into the rest of the serial at all well. It is much more enjoyable than the last two episodes, but doesn't gel together with them. This leads to a weird case of "solid episode, terrible serial".

William Hartnell is back as the Doctor, much more energetic and focused than when we last saw him - it looks like his two-week break did wonders for him. His investigation of the murder, and of the theft of the fourth Key of Marinus, is fairly simplistic stuff but for a family tea-time drama seems perfectly sufficient. It does have a few unexpectedly mature elements, however, such as an incident of domestic violence and the murder of a key suspect. Combined with Vasor's lecherous assaults on Barbara in the previous episode, it makes "The Keys of Marinus" a slightly suspect work for family entertainment.

It is all a little bit wobbly on a structural level: the previous four episodes have all been presented as done-in-one adventures, however this one ends on a cliffhanger without Ian being found innocent or the fourth key secured. It feels a little bit as if Terry Nation was writing his scripts as he went along, ran out of room with this storyline, and simply ended it wherever he was up to. "The Daleks" was, all told, a fairly shaky enterprise at the scripting level, and now that we're nearly through his second serial I'm beginning to think Nation wasn't that good a Doctor Who writer after all. Sure he created the Daleks, but how much of that was Raymond Cusick's design work and the actors' brilliantly ring-modulated voices?

This episode, on its own merits, is enjoyable enough, and certainly a nice break. It gets a tick of approval, bringing Season 1 up to 17 good episodes out of 25. That's a quality ratio of 68 per cent.
Posted by Grant at 11:31 PM