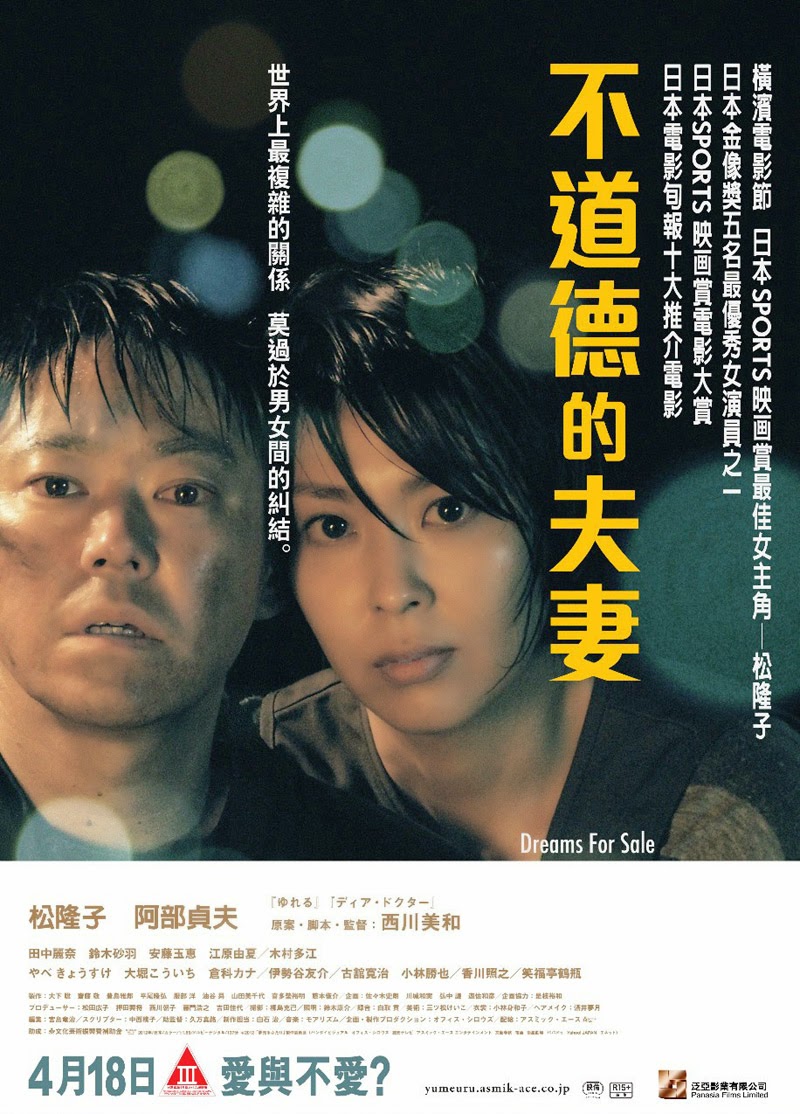 In an outer suburb of Tokyo, Kanya Ichizawa (Sadawo Abe) and his wife Satoko (Takako Matsu) own and operate a popular local restaurant. When a freak accident sees their restaurant burn down, they are inconsolable. Satoko does her best to make ends meet by working in a nearby ramen shop, but Kanya slips further and further into depression. When Kanya winds up sleeping with one of their former customers - who then gives him a large sum of money with which to fund rebuilding his own restaurant - Satoko sees an opportunity to reclaim their lost investment by setting him up with other, more unsuspecting, women.

I came to Dreams for Sale because I'm currently researching book on Japanese cinema. As I was developing a list of 36 films to discuss I noticed fairly quickly that none of them were directed by women. This led me to realise that to my knowledge I had never seen a Japanese film directed by a woman. Keen to remedy this oversight I went actively looking for a subtitled DVD or bluray; in the end it's taken me about a year to track a suitable film down.

It was worth the search: Dreams for Sale is a beautifully shot, morally ambiguous drama that is centred on two excellent performances. It is a remarkably bleak film, offering no easy answers and slowly sliding into a sort of distasteful miasma of poor life choices and cruel deception.

The film is the work of writer/director Miwa Nishikawa: released in 2012, it is the most recent of her four feature films. Prior to stepping out on her own Nishikawa was an assistant director to Hirokazu Koreeda, whose lyrical drama Air Doll I reviewed a few months ago. The similarities between the two films are rather clear: both quite slow and measured in their pace, both focused on strong performances, and both presenting rather downbeat profiles of human behaviour.

This is a remarkably slow film, running for well over two hours with a plot that could be fully expressed in 90 minutes. At first this frustrated me, but as I became used to its rhythms I found myself focusing more and more on the characters and the uniformly excellent performances. Takako Matsu is absolutely brilliant as Satoko. She begins the film so defiantly cheerful, but once Kanya's infidelity is revealed she slowly becomes consumed by her resentment towards him. At first it seems like her plan for Kanya to seduce vulnerable women and then scam them out of their savings is a means to an end. As the film progresses it becomes clear she's using it as a punishment: like a bad parent catching their child drinking alcohol and forcing them to drink the whole bottle, she forces Kanya again and again into seducing all manner of fragile, brittle women in order to emotionally wound and torture him. I had previously seen Matsu in the brilliant thriller Confessions, where she delivered a similarly dark and complex performance. I think she's become my favourite contemporary Japanese actor.

Sadawo Abe plays Kanya as an immensely fallible and guilt-stricken man. He seems to engage in Satoko's plan to punish himself, and it is heart-breaking watching him meet a series of vulnerable women - all of whom could make him happier than his distanced, increasingly vindictive wife - only to screw them over time and time again. Both Abe and Matsu are walking a tightrope in this film, because it would be easy to make both characters deeply unsympathetic. Instead they make them very familiar and relatable, and that makes the film's slow descent incredibly effective.

Of Kanya's victims the most striking is Hitomi (Yuki Ebara), a weight-lifter and physical education teacher in contention for the Olympic team and saddled with painful body image issues. Ebara plays the part with such soul and heart that I was immediately sympathetic to her, and her brief relationship with Kanya shows his and Satoko's plan at its most cruel.

This film is a tragedy: its end game is visible from the moment Kanya is unfaithful to Satoko, but each character seems cursed to perform the most awful and inevitable of actions, and to make one wrong choice after another, until all there seems to be in the end is emotional wreckage. This is not as easy film, but it is an absolutely remarkable one.
Posted by Grant at 9:47 AM