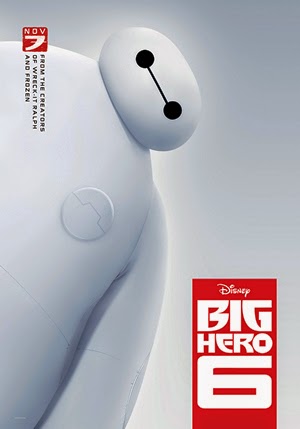 In the city of San Fransokyo, teenage super-genius Hiro Hamada is invited to apply to an advanced school for robotics - but when tragedy strikes he turns to fighting crime instead, with the assistance of his fellow students and a white inflatable medical robot named Baymax.

The Walt Disney Animation Studio has been on a bit of a roll in recent years with a string of critical and commercial hits including Tangled, Wreck-it Ralph and Frozen. It's pretty easy to assume Big Hero 6 is going to join those films: it's beautifully animated, has immensely appealing characters, and tells a slick, well-paced three-act story in the most deft manner imaginable.

And yet it's very slightly disappointing. It's not the fault of Big Hero 6, its directors Chris Williams (Bolt) and Don Hall (Winnie the Pooh), or the multitude of Disney artists and technicians who made it. It's just that it's the 27th superhero movie of the past five years, and by this stage the tropes and archetypes of the genre are getting pretty god-damned stale.

It doesn't matter that there's great stuff to see here, the problem is that we've seen it. Even outside of the superhero genre Big Hero 6 feels in part like a mixture of recycled elements from The Terminator to Tron. It's the problem that comes with entering an over-saturated pool of pop culture, and to a certain extent Big Hero 6 doesn't bring enough original material to float above the surface. Don't get me wrong: this is a very well-crafted and highly enjoyable family film that was very enjoyable. The problem is that Walt Disney have raised the bar for themselves: alongside earlier animated films like Meet the Robinsons and Bolt this would seem exceptional. Against Wreck-It Ralph and Tangled it's very slightly ordinary.

Thankfully while the plot is hardly worth writing about, the character are generally excellent. Williams and Hall do a great job of introducing the titular six heroes quickly and efficiently, with each getting enough personality in broad strokes for the audience to remember who each of them are. The highlight is absolutely Baymax, a deadpan robot designed as a medical assistant who is co-opted into becoming a karate-fighting, armoured crime-fighter. He gets most of the best jokes and lines, and is sure to become a popular favourite.

Early scenes involving Baymax and Hiro showcase the film at its best, and produce some wonderfully heartfelt comedy and drama. Once the film expands from telling the story of a boy and his robot overcoming grief to that of six vigilantes taking down a criminal mastermind, the air is let out of the balloon somewhat. By the film's climax it has all become a little bit predictable: satisfying to an extent, but overly familiar. It would be easy to say that this wasn't Disney's fault, but given they own Marvel Studios they're responsible for a fair proportion of the superhero movies that have led to this situation.

So in summary: Big Hero 6 is good. Baymax is great. It's all just a little bit too familiar, however, like one day trip too many to the same zoo.
Posted by Grant at 5:39 PM