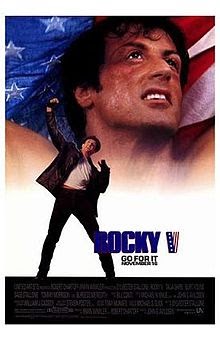 Following his brutal fight with Ivan Drago, Rocky Balboa is diagnosed with life-threatening brain damage that could kill him if he fights again. At the same time, his brother-in-law's financial mismanagement sees Rocky's entire fortune evaporate, forcing him to return with his family to the Philadelphia neighbourhood where his career first started. When he meets up-and-coming boxer Tommy Gunn, Rocky sees a chance to re-connect with the boxing world, not as a boxer himself but as a trainer and manager to the next generation.

Rocky V is a self-conscious attempt to drag the Rocky franchise back from the over-the-top mythic blockbusters of Rocky III and IV and back to the personal drama of the first two films. It brings back original director John G. Avildsen, and tries to restore a bit of the realism that got jettisoned in the 1980s. It's partially successful in this regard. Audiences of the time hated Rocky V, which is fair enough - it's a big departure from Rocky IV. Critics of the time hated it as well, which is perhaps a little less forgivable. It's a very flawed film, but not the total disaster they made it out to be.

Sylvester Stallone is back playing the same kind of Rocky that he played in the first two films, which is a little jarring at first: it's as if Drago punched him so hard his old personality returned. Talia Shire gives what has become a typically solid supporting performance as Adrian, and she gamely jumps over some genuinely bad dialogue in the film's opening act. It's this first 20 minutes that's hard to swallow, as the script veers wildly from cliches to pantomime. For some reason this film contains two press conferences, and in both of them the actors play the assembled sports journalists like the cast of a Chicago musical number. Similarly over the top is Richard Gant as boxing promoter George W. Duke, a broad parody of real-life promoter Don King.

Once the film struggles over its first act - which seems like a perpetual problem with the Rocky sequels - things begin to smooth up and improve. Rocky takes over Mickey's boxing club and connects with young boxer Tommy Gunn. Gunn is played amiably by Tommy Morrison, but he's a limited actor. Lacking the skill of Stallone, Shire or Burt Young (at his franchise-best here as Paulie), he flounders with an overly earnest and fairly simplistic character.

More successful is Sage Stallone playing Rocky's son Robert, now mysterious aged by four years while his parents were away in Russia. The rapid aging of Robert Balboa goes unexplained and unacknowledged. Given that they appeared to leave him in the care of Paulie's robot during Rocky IV I can only assume some kind of time travelling science fiction hijinks ensued in their absence.

As Rocky devotes more and more time to training Tommy (who predictably winds up jumping ship to Duke when he's approaching a title fight) he spends less and less time with Robert, leading to a fairly predictable but well-played falling-out between father and son. There's nothing original or unique to be had in this film - what there is to be had is a warm, broadly enjoyable reunion with a set of beloved characters. Even Mickey (Burgess Meredith) gets one final scene via flashback. Meredith's visibly a much older man that he was in his last appearance (eight years earlier), but it's such a well-delivered monologue that I found it hard to complain.

Rocky V ends not with a boxing match but a street fight. It's obvious watching the scene that Stallone originally intended for Rocky to die at the film's climax, but a risk-averse studio insisted he change it. It's a decision that weakens the film overall, since its narrative trajectory now leads to a dead end. On the other hand it leaves the door open to the vastly superior Rocky Balboa some years later. It's a weirdly shot street fight as well, that looks more like a late 1980s pop music video than the climax of a feature drama. It even has an ill-conceived sort of vague hip-hop score than chafes with the franchise's established aesthetic.

Rocky was intended as the final film in the series, and it's partially successful in that regard. It's rather bold in the way it strips away all of Rocky's fame and success and leaves him back where he started - living in a poor suburb of Philadelphia in relative poverty. The idea of Rocky transitioning from boxer to trainer is also a good one, although here it winds up only partially successful because it devotes much more time to Rocky's conflict with his son. The forthcoming spin-off Creed - in which Rocky trains Apollo Creed's grandson - should hopefully be more successful in this regard.

This is a very shaky, oftentimes flawed film, but for some reason I like it. I've grown accustomed to these characters. I want to make sure they're okay.
Posted by Grant at 8:57 AM