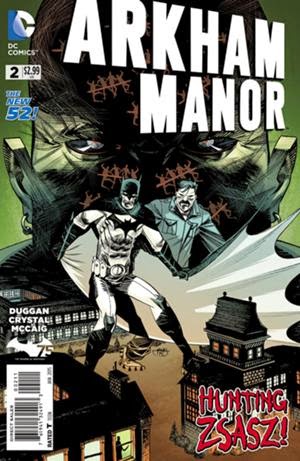 At the same time that sales figures for November 2014 were announced, DC Comics confirmed a whole raft of cancellations in March 2015. Prepare to say goodbye to Aquaman and the Others, Infinity Man and the Forever People, Klarion, Secret Origins, Star Spangled War Stories, Trinity of Sin, Worlds' Finest, Arkham Manor, Batwoman, Green Lantern Corps, Green Lantern: New Guardians, Red Lanterns and Swamp Thing. That's thirteen cancellations in one hit, suggesting that once DC's two-month Convergence event is over we're going to see a hell of a lot of issue ones come June 2015. (I told you DC would cancel the Lantern spin-offs in 2015.)

The cancellation of Arkham Manor is particularly odd, given that its first issue only came out in October. Its second issue, released in November, saw a 33% drop to 30,907 units - that's actually really respectable, and suggests a book that could run for at least 12-18 issues. Instead it's going to close at just six. It makes me wonder if it was intended as a six-part miniseries all along, but was simply promoted as an ongoing in order to boost its sales (miniseries do not sell well in this day and age). Either that or writer Gerry Duggan's exclusive contract with Marvel doesn't include exceptions for Arkham.

One new monthly in November: horror ongoing Gotham by Midnight launched to a shade over 38,400. That's below both Arkham Manor (45,922) and Gotham Academy (43,338) in October, and suggests a book without about one year of juice in it. Given Ben Templesmith is producing the artwork I'm a little surprised it didn't launch better.

Here's how the other new books (six issues in or less) are going:
A few other observations, based on November sales data:
So, all up, what books are sitting in the danger zone? Books coded 'orange' are selling between 20,000 and 30,000 copies a month, so there's a good chance DC is keeping a very close eye on them. Books coded 'red' are selling less than 20,000 copies and are in immediate risk of cancellation. Books coded 'black' are dead in the water with less than 10,000 copies shipped. Anything already cancelled is highlighted in bold text.