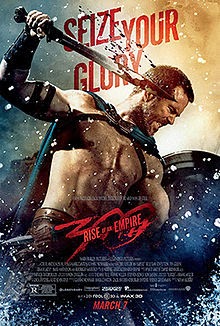 There is enormous potential for a Hollywood studio to develop a feature film about Queen Artemisia of Caria. Were Hollywood to make such a film it would be a perfectly good choice to cast Eva Green (Casino Royale) in the role. Sadly while 300: Rise of an Empire focuses on one version of Artemisia, and that version is played capably by Eva Green, it's not the adaptation the real Artemisia warrants nor the feature film that audiences deserve.

The original 300 opened in cinemas in 2007. It was a gaudy, over-stylised abomination, not only warping history but actively reversing it. It was a pretty dead-on adaptation of Frank Miller's graphic novel of the same name, but since that novel was a spiteful and racist diatribe by a writer and artist long past his sell-by date, that accuracy didn't work in its favour. I had hoped that, perhaps, Rise of an Empire might be different. It's not directed by Zack Snyder for one thing, since he had since moved on to direct Warner Bros' Superman movies. It seemed to be about more than Frank Miller's curiously twisted vision of what Sparta was like, as well. I figured I'd give it a chance: I've seen plenty of cases where the first film has been awful and its sequel has been reasonably enjoyable.

Historical accuracy remains almost wholly thrown out of the window, with Artemisia re-envisaged from Greek queen and naval commander into a former sex slave turned villainous femme fatale. In one key scene she attempts to convince a Greek general to change sides by having violent sadomasochistic sex with him. It's entirely gratuitous, of course, but then that's part and parcel of the 300 experience: gratuitous sex and nudity, gratuitous violence and gore, gratuitous fantasy trimmings around the edges. It's eye-rollingly dull to sit through.

Eva Green gamely does her best. Sullivan Stapleton is earnest in the role of Greek commander Themistocles, but like Green has doesn't really have a lot with which to work. Several actors return from the original film, including Lena Headay, Rodrigo Santoro and David Wenham, but they all seem remarkably bored, drumming their fingers and waiting for their pay cheque.


This is an unremittingly dreadful film from beginning to end. I had hopes at the beginning; they were dashed within minutes. Fingers crossed that this is the end of the 300 saga: I don't think anyone deserves to have Greek history tortured and masturbated over like this again.
Posted by Grant at 1:19 PM