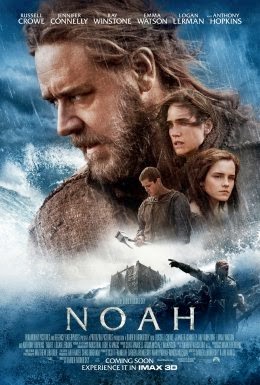 Darren Aronofsky is one of America's boldest and most interesting filmmakers. He impressed me straight out of the gate with his idiosyncratic thriller Pi, a black and white Jewish science fiction thriller about mathematics. His follow-up Requiem for a Dream was a perfectly constructed adaptation of a highly confronting novel. While a lot of people found his third film The Fountain a bit too weird and difficult with which to engage, I've found it a really bold experiment - albeit only partially successful. Aronofsky then bounced back into mainstream success with The Wrestler and Black Swan, both of which I rate very highly, each boasting superb performances by their respective lead actors and really sticking hard in the memory afterwards. Now in 2014 he's directed Noah, an epic adaptation of a few Bible verses from the Book of Genesis. If it was any other filmmaker I'd be scratching my head. Since it's Aronofsky I'm simply nodding my head and watching this immensely talented writer/director do his thing.

The plot of Noah for those who have somehow never encountered it: humans have become wicked. God tires of this wickedness and sends a flood to wipe them out. Before the flood hits he tells one man, Noah, to build an enormous wooden ship - the ark - to house and protect the world's animals until the flood abates.

Talk about shooting from behind the eight-ball. In adapting Noah's story Aronofsky faces two major challenges. On the one hand there's the problem of using a fairly realistic artistic medium to tell a story that, in cinema's terms, is completely unbelievable. On the other there's the risk of upsetting a large number of people around the world for whom Noah's story forms a cornerstone of their religious texts. Now opinions are going to vary wildly on this movie: personally I think he pulls it off. It's imaginative but respectful.

The trick, I think, is that Aronofsky allows the narrative to be entirely fantastical. Fallen angels are represented by enormous crippled rock monsters. God appears to Noah in allegorical dreams. The animals that populate Noah's ark are not completely recognisable at all, but are rather weird proto-animals: recognisable in part as existing creatures but transformed into fictional ones by judicious design and computer-generated graphics. He develops a world, but it's clearly not our world. If you're not a religious person - I'm personally not religious - it's possible to view and enjoy this film as a fantasy picture on the same level as The Lord of the Rings.

At the same time Aronofsky makes his characters extremely realistic. They react to unimaginable horrors the same way that we would: my favourite scene of the whole picture is probably in the middle of the flood. Noah and his family are safe inside their ark, and they can hear thousands of people screaming in terror and drowning in the waters outside, and they simply have to sit there and cope with it. It was easy as a child to read about a flood and all the wicked people being swept away. It's much more difficult as an adult to watch a film adaptation and realise exactly what that must have been like. In places this is an extremely dark and horrifying film.

It's also a beautiful film. The entire piece is short with a sort of visual lyricism. It's not realistic, and as such the landscapes can be as inventive and astounding as Aronofsky wants them to be. Parts of his created world we only glimpse - we know that the humans established an industrial civilization that has collapsed, but we only get glimpses of that world from the fringes. On visual grounds alone Noah seems a must-see. One jaw-droppingly provocative sequence midway through sees Noah re-tell the story of creation, only his Biblical narration is perfectly matched by an animated blend of CGI and stop-motion that tells the scientific story of creation. It seems perfectly matched.

The cast are uniformly excellent. It would easy to see Russell Crowe's growling, tense portrayal of Noah as simply slipping back into his Gladiator persona, but there's an enormous amount of inner conflict reflected in his eyes. It's a superb performance. Also impressive are Jennifer Connelly and Emma Watson as Noah's wife and daughter-in-law: one gets mentioned I think once in the Bible, the other is entirely created for the film, but in Connelly and Watson's hands they gain enormous depth and resonance. Watson in particular impressed me during the film's climax, in which Noah is hell-bent on sacrificing her newborn twin daughters. It's a combination of grief, panic and pure rage, and far and away the best acting she's done in her life.

It's not a perfect film: at 138 minutes it runs a solid half hour longer than is necessary, and some judicious editing or rewriting could have improved it significantly. There's so much to appreciate here, however, whether it's the mise-en-scene, the staggeringly impressive visual effects or the complex performances. I suspect a lot of people will hate this film. I absolutely adored it.
Posted by Grant at 9:14 AM