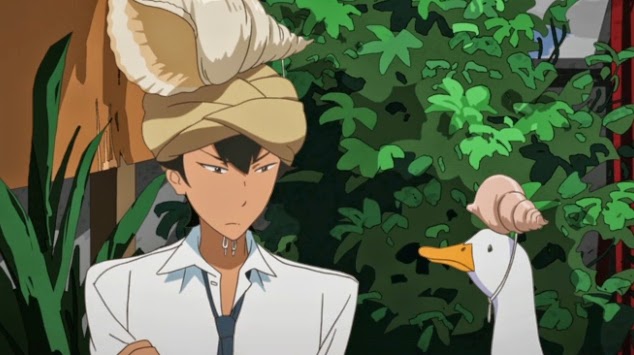 Yuki, Natsuke and Akira all return to Enoshima to reunite with Haru. With the help of their family and friends they develop a plan to fish JFX out of the ocean to stop it from controlling the minds of everyone in town - and potentially the whole planet. Time, however, is not on their side.

The dramatic race to Tsuritama's finale continues. This episode is 50 per cent set-up and 50 per cent back story, as we get a lot more information on JFX's history filled out, and the four lead characters are smoothly reunited and positioned for their final fishing expedition. As much as I really liked the last episode I think this one is better: it has a much stronger drive behind it, and it manages to be laugh-out-loud funny as well. It's a great combination.

Some of the episode's scenes are flat-out weird: one scene sees Akira abandon his protective suit disguise in favour of tying a large shell to the top of his head. Maybe I wasn't paying attention. Maybe it's a Japanese cultural reference with which I'm unfamiliar. Maybe it's just weird. Possibly it's all three. At any rate it's odd moments like this that have continued to make Tsuritama such a delight.

It's also clear that the series has been deliberately structured into three distinct phases. The first focused on bringing Yuki out of his shell and to better handle his anxieties. The second focused on reconciling Natsuki with his family, following their slow estrangement. This third and final phase focuses on Haru, who was a catalyst to the plots of the other two sections but now needs the help of his friends himself. Haru is great in this episode, demonstrating a depth and a sympathetic quality that he has lacked in earlier episodes.

Ten episodes in, eight good, a quality ratio of 80%. Two more episodes to go.
Posted by Grant at 8:10 AM