Doctor Who: "The Snows of Terror" 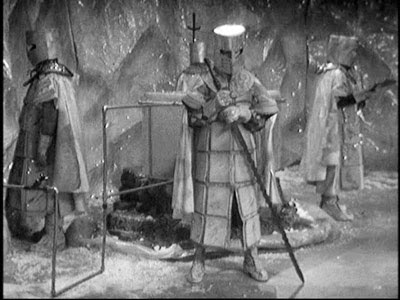 Ian and Barbara are rescued from the mountainside by a grizzled trapper named Vasor. While at first he seems hospitable, it soon transpires that he wants Ian dead and Barbara for himself - and he may have already done away with Susan, Altos and Sabetha. Then there's the matter of the next key, hidden somewhere within the nearby caves and defended by ice soldiers.

By breaking this serial down into a series of essentially self-contained 25-minute adventures Terry Nation has turned the series into something much more akin to the children's serials of the 1950s. That's not a particularly good thing: one of the strengths of Doctor Who, even in this debut season, is that it's a family programme. While children may watch and enjoy it, teenagers and parents are going to like it as well. Earlier serials, particularly "Marco Polo", have managed to balance the needs of both child and adult audiences, whereas "The Keys of Marinus" is really only pitching for the younger demographic.

"The Snows of Terror" really is generic tosh: characters act with the simplest of motivations, while overcoming the most obvious and trite of plot developments. There's a pack of wolves from which to escape, and a maze of tunnels to navigate, and a rickety rope bridge to cross. Most bizarre of all is an icy chamber where our heroes find the next key, surrounded by knights in medieval armour. There's something ridiculously Monty Python-esque about the soldiers. They're obviously the result of Nation's script straining the series' finances (new locations every episode burn up a low budget), and they simply don't work. They also run around like panicky humans rather than some terrifying frozen statue come to life. Any potential they have as monsters is ruined in the rush.

This week's guest star is Francis de Wolff as Vasor. He'll return later as Agamemnon in "The Myth Makers", which will serve his talents a little better. Here he's wasted on a terrible cliché. The regular cast gamely attempt to overcome the script's shortcomings, but it's an uphill battle. William Russell has toned down his performance a little, which helps things somewhat. Jacqueline Hill continues to deliver the best acting, although even she can't manage to make Barbara's fight with Vasor in his hut convincing.

The episode ends with the weirdest of jumps: the heroes all teleport away from Vasor's hut together, although we don't actually see them disappear for budget reasons: cuts were expensive in 1964 - cross-fades even more so. The next shot we see Ian on his own looking over an unconscious body, before being knocked unconscious himself. Where is everybody else? It's genuinely confusing. It's possible a shot has somehow been lost over the past 50 years, but I'm not sure it was. John Gorrie's direction of this serial really is unbearably sloppy.

We're 24 episodes in, and 16 have been good: that gives Season 1 a quality ratio of 67%. "The Keys of Marinus" itself is faring much more poorly: we're four episodes into this serial, and only one has been particularly watchable. We've still got two more parts to go.
Posted by Grant at 9:19 AM