Doctor Who: "The Warriors of Death" 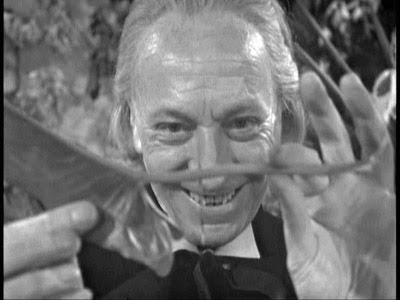 Barbara retains a tenuous hold over the Aztec high priest Autloc, however it is clear that the priest of sacrifice Tlotoxl no longer believes her ruse. When Ian defeats Ixta in an unarmed challenge, Tlotoxl urges the 'perfect victim' to demand a rematch. The Doctor continues his attempt to track down the son of the tomb's designer - unaware that the son he is seeking is Ixta. Meanwhile Susan receives tutoring in how to be a dutiful Aztec wife.

Everyone circles everyone else in this 25-minute exercise in chicanery and intrigue. Barbara struggles to maintain authority over Tlotoxl. Tlotoxl also manipulates the perfect victim to get at Ian. The Doctor wants to find out about the door mechanism on the temple's tomb, while Ixta uses that desire to his own advantage and turns the Doctor into an unwitting accomplice against Ian. It's an enormously satisfying half hour of television that may run the risk of boring its key target audience (children) but manages to pull it all off through tight direction by John Crockett and sterling performances by both the regular and guest cast.

It's worth taking the time to fully appreciate John Ringham's performance as Tlotoxl. He makes an extraordinary impression for several reasons. He's well costumed with great make-up, making him look both striking and slightly terrifying. He gives a well-pitched theatrical performance, reminiscent of Shakespeare's Richard III: constantly calculating, physically hunched over and wonderfully sly. Best of all, it's clear that Tlotoxl thinks he is the hero of his story. One-note pulp villains are a dime a dozen; I will always favour an antagonist with a bit of depth and complexity, and I think we get it here. More than that: Tlotoxl is clearly Doctor Who's first stand-out villain. Tegana was a serviceable antagonist for "Marco Polo", but as I noted in my reviews he rapidly fell into a sort of ridiculous Scooby Doo-style hand-rubbing villainy. The Daleks made for great monsters but lacked a personality of their own. By contrast Tlotoxl is brilliant. He's not just one of my favourite villains from this era, but one of my favourites for the entire 26 years of the original series.

The Doctor and Barbara's conflict is partially resolved this episode with a great argument. Hartnell and Hill are definitely the best actors among the four regulars, and this scene is written to their strengths. There's a real fire in the fight and real affection in their subsequent apologies and reconciliation.

This episode it's Carole Ann Ford's turn to take a two-week holiday, yet rather cleverly they pre-taped a scene for her with Autloc during production on "The Keys of Marinus" - so while Ford was away during production of this episode she still manages to appear. This is a pretty big deal for a series made at a time where every edit cost quite a lot of money.