Doctor Who: "The Keys of Marinus" 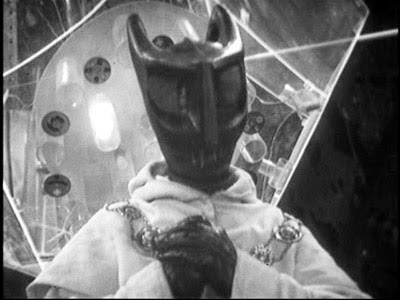 With Susan held hostage, the Doctor and Barbara's investigations into the murder for which Ian stand accused is in mortal jeopardy - and even if they can prove Ian's innocence, there's still the matter of getting the four keys back to Arbitan before the Voord take over the Conscience.

My this is an oddly structured episode. I mentioned this problem in regards to the previous episode, "Sentence of Death", which seems to roll along as an unexpected courtroom drama until it simply ran out of time. That theory seems borne out here, since "The Keys of Marinus" (the episode, that is, not the serial) wraps up the murder trial for about 12 minutes before jumping back to the island from "The Sea of Death" to finish the entire quest narrative in the remaining 10 minutes.

The Millennius storyline remains remarkably strong, even if it does feel somewhat like it should have either been truncated down to one episode or expanded out to two. To be honest I'd have quite happily traded both "The Screaming Jungle" and "The Snows of Terror" for more legal intrigue. The entire regular cast seemed to respond remarkably well to the more dialogue and character-based elements of the serial, particularly William Hartnell who remains a powerful presence in this episode. He still doesn't quite resemble the Doctor that we've all been watching for the past century, but this does seem like the first time he's motivated by justice rather than a desire to escape to his TARDIS.

The episode's second half feels far more perfunctory and rather rushed. The Voord have invaded and killed Arbitan off-screen, and their leader Yartek (another man in a wetsuit with a silly helmet) is waiting for the Doctor and his friends to arrive with the final key. Yartek announces his name as if the audience should care, and his masterplan appears to involve wearing the late Arbitan's robes with a hood pulled over his hilariously tall helmet.

It's all very much a non-event, like a sort of contractual requirement to cash in the plot coupons, so to speak. The serial climaxes simply because it's initial premise demanded that it should, rather than because the writer or audience care. I certainly didn't. They could have simply fled to the TARDIS and left Marinus to its own devices so far as Nation had allowed me to care.

Let's take a moment while we're here to pop a little bubble of perceived wisdom: the idea that the Voord were intended to be a follow-up to the Daleks. Doctor Who fans seem to repeat this piece of assumed trivia whenever "Marinus" comes up, and based on their two appearances in six episodes I find it fairly hard to take seriously. Had the production team really wanted to highlight the Voord as a proper monster to take hold of the public's imagination I suspect they would have included them in more than two scenes in six weeks. They may be the second Doctor Who monster ever broadcast, but they're barely present in their only televised adventure to date (I say to date because honestly you never know - who before 2007 would have bet money on the Macra coming back?).

Despite a decent first half this episode winds up all scattershot and half-hearted. I'm not giving this one the tick of approval, leaving "The Keys of Marinus" all done with just two good episodes out of six. It's definitely the least accomplished serial of the five I've watched so far. Overall Season 1 is now sitting with 17 good episodes out of 26, and a quality ratio of 65%.
Posted by Grant at 6:35 PM