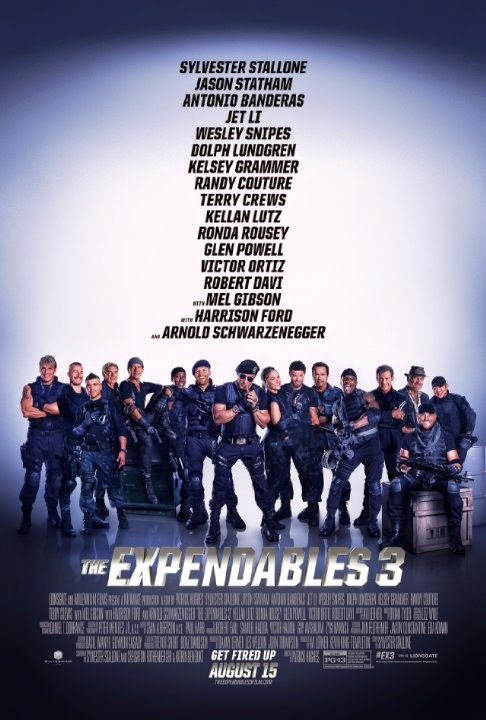 I think there's a valid place in the landscape of filmmaking for movies like the Expendables franchise. They lack plot, subtlety or depth, but what they do have in spades is a rolling cavalcade of aging action stars railing against the dying of the light, shooting bad guys in waves and uttering ridiculously corny and obvious one-liners. It's like a victory lap: it's a veteran's parade for the soldiers of Hollywood escapism.

With that idea in mind, I rather enjoyed the original Expendables and I actively adored its ridiculous sequel, so deliberately obvious that it featured a villain named Vilain. I did intend to see the third film in cinemas, but then a rash of really negative reviews gave me pause. I've just caught up with it on home video, and have managed to form my own opinion.

In this case the critics are right: The Expendables 3 is a pretty bad film.

Okay, pretty bad but not so bad that I didn't enjoy myself at least part of the time. It's always fun to watch Sylvester Stallone do his action thing, and this third instalment features plenty of movie stars having another go at the whole action business: Wesley Snipes, Antonio Banderas, Mel Gibson and Harrison Ford. All four look like they had a lot of fun. It's even gleefully self-referential: Snipes is only just now able to return to acting after a brief period in prison, so the film begins with the team breaking him out of prison. Similarly characters occasionally say lines that their actors have said in other, much better films, and there's a smile to be had in recognising the reference.

The film's biggest problem is that after a fairly ridiculous (and fairly enjoyable) opening shoot-out in Mogadishu the entire team of middle-aged mercenaries - Jason Statham, Dolph Lundgren, Terry Crews, Randy Couture - are sidelined in favour of a new team of young up-and-coming hopefuls. Given the entire appeal of the Expendables franchise is seeing old 1980s warhorses (and, curiously, Jason Statham) trot out another time for nostalgia's sake, having them removed from the middle of the film makes the middle of the film fairly pointless. It's not as if there's plot, depth or originality to entertain the viewer.

When the entire team is reunited for the climax, things pick up considerably and it's all ridiculous over-the-top fun, but by this stage a lot of viewers will have moved on or dozed off. Seeing Harrison Ford pilot a helicopter with Arnold Schwarzenegger and Jet Li shooting machine guns out of the windows should entertain any action movie fan on some level.

Of the new faces Antonio Banderas makes the best impression, doing a similarly exaggerated performance to his turn in Assassins back in 1995, when he last teamed with Stallone. Kelsey Grammer also makes a surprisingly good appearance, playing a character who seems to have walked in from a much better written and directed film. Mel Gibson plays the villain, the Australian arms dealer Conrad Stonebanks. Seeing him again after a long break (I have not seen The Beaver or Get the Gringo) reminded me immediately of why he was so popular in the 1980s and 1990s. He has a weirdly magnetic screen presence.

If you go in with the right attitude, there is some stuff to enjoy here, but it's worth noting that this isn't as good as either the first or second Expendables. If you've seen either of those films, you can probably gauge pretty quickly whether or not this is a film for you.
Posted by Grant at 10:22 PM