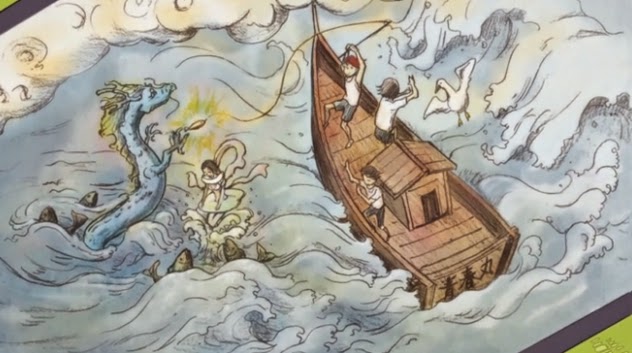 What the hell do you say about the finale of a serialised story? You can't criticise the structure, because all you're generally watching is a climax and a denouement. You can't talk at length about the characterisation, because if the characters aren't working at this stage in the game - episode 12 of 12 - then there's not really much that can be done.

What I can say about this final episode of Tsuritama is that it's a visually brilliant climax, and it's followed by an emotionally satisfying epilogue. There's even a little post-credits 'kicker' that I almost missed, that sits somewhere between being a sweet little hint that life goes on and a hopeful lead-in to a second season that never arrived. This series doesn't need a second season: I liked it a lot in the end, but 12 episodes of fishing for sea bass in Enoshima is probably enough for any series.

The actual climax, with Yuki straining to reel in a gargantuan alien monster fish, is animated like something out of a Hayao Miyazaki feature. There's a genuine sense of scale to what he's trying to achieve, and the sight of a black slarm of leaping, swirling fish is very effective. Likewise the climax's aftermath, as thousands of fish slowly fall back from the sky to the sea, is a visual marvel. This has generally been a rather pretty anime, with a great use of vivid colour, and this final episode is not different.

It's also a pretty good example of why I like anime so much. It's not just the animation itself, it's that as a medium Japanese animation seems much more open to pretty weird things. I like weird: I like that one of the lead characters in this series constantly talks to a duck. I like the idea of a purple-eyed alien boy with a mind-controlling water pistol. Above all I love the idea that going fishing is a solution to the world being taken over by an alien. Sure this series might have been better served in eight episodes rather than twelve, or even as a self-contained movie, but it is what it is: and what it is was pretty enjoyable to me.
Posted by Grant at 9:01 AM